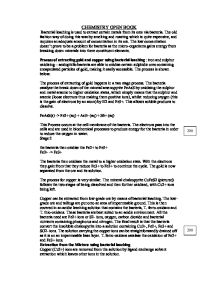 CHEMISTRY OPEN BOOK Bacterial leaching is used to extract certain metals from its ores via bacteria. The old fashion way of doing this was by smelting and roasting which is quite expensive, and requires an adequate amount of concentration in its ore. The low concentration doesn't prove to be a problem for bacteria as the micro-organisms gains energy from breaking down minerals into there constituent elements. Process of extracting gold and copper using bacterial leaching: iron and sulphur oxidising - acidophilic bacteria are able to oxidise certain sulphidic ores containing encapsulated particles of gold, making it easily accessible. The process is shown below. The process of extracting of gold happens in a two stage process. The bacteria catalyse the break down of the mineral arsenopyrite FeAsS by oxidising the sulphur and metal arsenic to higher oxidation states, which simply means that the sulphur and arsenic (loose electrons thus making them positive ions), whilst reducing oxygen (this is the gain of electrons by an atom) ...read more.

Extraction from the Mixture using bacterial leaching Copper (Cu2+) ions are removed from the solution by ligand exchange solvent extraction which leaves other ions in the solution. Ligand - is an atom, ion or functional group that is bonded to one or more central atoms or ions, usually metals generally through co-ordinate covalent bond. A lot of such ligands around a centre are termed a complex. The copper is removed by bonding to a ligand, which is a large molecule consisting of a number of smaller groups each possessing a lone pair. The ligand is dissolved in an organic solvent such as kerosene and shaken with the solution producing this reaction: Cu2+(aq) + 2LH(organic) -> CuL2(organic) + 2H+(aq) The ligand donates electrons to the copper, producing a complex - a central metal atom (copper) bonded to 2 molecules of the ligand. Because this complex has no charge, it is no longer attracted to polar water molecules and dissolves in the kerosene, which is then easily separated from the solution. ...read more.

Environmental advantages also include that the bacteria used can be recycled for reuse, decreasing expenditure. Some environmental disadvantages are associated with bacterial leaching including that heavy ions such as iron, zinc and arsenic, can leak out of the mine during draining, forming an ionic precipitate when diluted by fresh water. Bacterial leaching requires little labour so it's profitable compared to the Traditional methods. Sulphur dioxide is not released in bacterial leaching and doesn't need high temperatures to run Development stages of new mining process Bacterial leaching is used a secondary for copper as it is extracted too slow and the companies can't profit at all-because the metal recovery may take decades. Bacterial leaching is used as primary extraction for gold: the arsenic produces is non toxic and greater % of gold is extracted by bacterial leaching. A lot of research has gone into to find to find best bacterial culture and conditions. A lot of funding has gone into developing the pilot stages. 'Research at BacTech quickly progressed from 450 dm3 laboratory plant then to a 32m3 transportable pilot plant. ...read more.