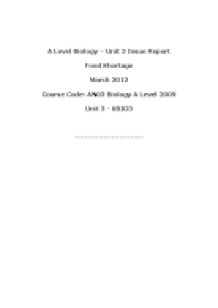 ﻿A Level Biology ? Unit 3 Issue Report Food Shortage March 2012 Course Code: AN03 Biology A Level 2009 Unit 3 - 6BIO3 -------------------------- ________________ Problem ? Producing Enough Food for the World?s Growing Population Food shortages are not a new problem but they have become more widespread in recent years. Food riots took place in Haiti in 2008 following demonstrations over the rising price of food and India suffered drought due to the failure of monsoons in 2009 (1). Famine is a very real issue right now in Africa with the Sahel region of West Africa facing a ?worsening food crisis (2)?. In the Horn of Africa (see fig 1) in 2011 tens of thousands of people died (estimates range between 50,000 and 100,000) from famine following a drought said to be the worst in 60 years (3). Climate change is one of the reasons behind the drought that triggered East Africa?s 2011 famine. As climate change is unlikely to be reversed in the near future, reduced rainfalls are expected to continue and a solution is needed to combat the diminished growth of crops and yield in arid, populated areas. The world population is nearly 7 billion at the moment and the United Nations estimates it will reach 9.3 billion by the middle of the century (4). The majority of the increase is expected to be in developing countries. The UN also states that food production must double by 2050 to meet the demand of the world?s growing population (5). ...read more.

The gene is taken into the nucleus and begins to be expressed, producing the desirable phenotype. In the case of the Monsanto corn, this means drought-resistance. Biologists have proven the technique works, as documented in the Monsanto application: “The presence of the MON 87460 insert in the maize nuclear genome is best shown by the Chi square (χ²) analysis of the segregation data. The results show that inheritance of the drought-tolerance trait in MON 87460 follows Mendelian principles. This indicates that the single insert is stably integrated in the nuclear genome and is neither located in the mitochondria nor in the chloroplasts.” Chi Squared is a statistical test measuring the differences between expected outcomes and observed outcomes. In this case, the maize would not be expected to contain the transgene. The statistical significance of the Chi Squared test shows that the transgene can be passed on to multiple future generations of the plant. In addition, Monsanto state they have confirmed the insert is stably integrated within the maize’s nuclear genome and being inherited in Mendelian fashion through the use of Southern Blot analyses. Southern Blot testing detects the specific sequence of DNA in the corn to show the location of the transfer DNA. This process involves separating the DNA strand and then allowing it to form base pairs with a DNA “probe” marked with radioactivity (the technique can also use an enzyme). The radioactive DNA can then be located and shown in what has become widely recognisable as a “genetic fingerprint” as seen in fig 3. ...read more.

Another alternative is to use technology such as optical crop sensors, drip irrigation and multi-use, multi-crop machines. Given that many areas with drought problems are also very poor areas then the large financial outlay may be prohibitive. Evaluation of the Relative Validity of the Information I Gathered and its Sources A lot of the information used regarding Monsanto GM corn has come from Monsanto?s press releases or the document they prepared for the regulatory bodies. This has the potential to be biased as the firm have financial interest in the corn and are likely to market the best aspects of it, perhaps making it seem better than it is. However, the work they have carried out is regulated by the Food and Drug Administration (FDA) and the documentation I have used is officially scrutinised so I have some faith in the contents. The data on the genes used and the Agrobacteium mediated, Chi Squared and Southern Blot methods of genetic modification and analysis are reflected in both the Monsanto application and the FDA?s Biotechnology Consultation Note BNF 000116 The book ?50 Genetics Ideas You Really Need to Know? is written by Mark Henderson, Science Editor for the Times newspaper. He does not have any formal science training that I am aware of, so I reviewed the Brazil nut story on Academics Review website and am satisfied that it is genuine as it appears there also along with a reference to an academic paper on PubMed(12). ...read more.

****
Though demonstrating a good understanding of A level biology this is not a balanced account.