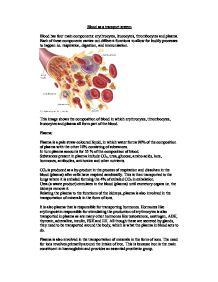 Blood has four main components: erythrocytes, leucocytes, thrombocytes and plasma. Each of these components carries out different functions to allow for bodily processes to happen i.e. respiration, digestion, and immunisation. 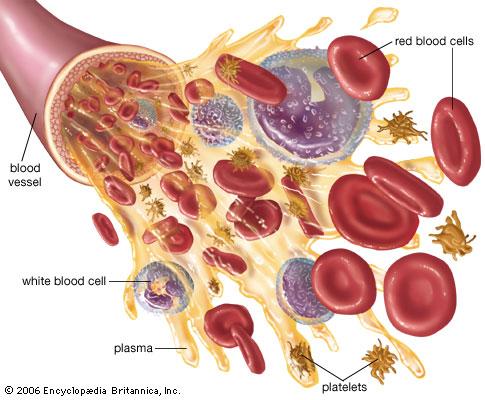 This image shows the composition of blood in which erythrocytes, thrombocytes, leucocytes and plasma all form part of the blood.

Plasma is a pale straw-coloured liquid, in which water forms 90% of the composition of plasma with the other 10% consisting of substances.

In turn plasma accounts for 55 % of the composition of blood.

CO2 is produced as a by-product in the process of respiration and dissolves in the blood (plasma) after cells have respired aerobically. This is then transported to the lungs where it is exhaled forming the 4% of exhaled CO2 in exhalation.

Urea (a waste product) circulates in the blood (plasma) until excretory organs i.e. the kidneys remove it.

Relating the plasma to the functions of the kidneys, plasma is also involved in the transportation of minerals in the form of ions.

It is also plasma that is responsible for transporting hormones. Hormones like erythropoietin responsible for stimulating the production of erythrocytes is also transported in plasma as are many other hormones like testosterone, oestrogen, ADH, thyroxin, adrenaline, insulin, FSH and LH. All though these are secreted by glands, they need to be transported around the body, which is what the plasma in blood acts to do.

Plasma is also involved in the transportation of minerals in the form of ions. The need for ions revolves primarily around the intake of iron. This is because iron is the main constituent in haemoglobin and provides an essential prosthetic group.

The development of erythrocytes is called erythropoiesis.This is how red blood cells are made as stem cells, which are synthesised in the bone marrow, develop into erythrocytes. This process is stimulated by the hormone erythropoietin, which is usually produced by the kidneys in turn this is stimulated by the amount of oxygen present in the blood, which is detected by the kidneys forming part of homeostasis and a negative feed back.

The primary function of erythrocytes is to deliver oxygen around the body to aerobically respiring cells. Red blood cells are suited to this function as they contain pigmentations called haemoglobin, which bind to oxygen to form oxyhaemoglobin. This allows for oxygen to be transported around the body. In addition to this is the shape, to which red blood cells form which is that of biconcave. This shape allows for maximum oxygen absorption. Also erythrocytes are characterised by the absence of a nucleus. This to allows for maximum oxygen absorption.

Haemoglobin in the blood is comprised of globular proteins with the addition of a prosthetic group (iron), which binds to oxygen in the process of diffusion. In correlation to this, is a erythrocytes ability to take on CO2 in deoxygenated bloodto the lungs for exhalation. This a shared ability in that plasma shares this function with RBCs.

Leukocytes are commonly known as white blood cells. Their main function is to protect against disease. In order to assist this function there are five different types of leukocytes which each interlink with each other to enable a compatible eradication of pathogens. The five different types include: neutrophils, basophils, eosinphils, lymphocytes and monocytes. Below is a table which I constructed to show the difference between all five leukocytes and their function:

Platelets or thrombocytes are fragmentations of cells which are used to clot the blood when a wound or cut is present to prevent severe blood loss. Together with leucocytes they form one percent of the total composition of blood.

Haemostasis is the process in which platelets are involved to lead to the formation of blood clots. This involves vasoconstriction, which minimises the diameter of the blood vessel to slow the bleeding.

This is the one primary function of thrombocytes.