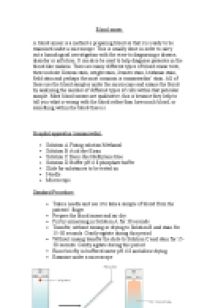 ﻿Blood smear A blood smear is a method o preparing blood so that it is ready to be examined under a microscope. This is usually done in order to carry out a homological investigation with the view to diagnosing a disease, disorder or infection. It can also be used to help diagnose parasites in the blood like malaria. There are many different types of blood smear tests, these include Giemsa stain, wright stain, Jenners stain, leishman stain, field stain and perhaps the most common is romanwoskis? stain. All of these use the blood samples under the microscope and exaine the blood by analysing the number of differnet types of cells within that paticular sample. Most blood smears are qualitative, this is because they help to tell you what is wrong with the blood rather than how much blood, or something within the blood there is. Hospital apparatus (romanowski) 1. Solution A Fixing solution Methanol 2. Solution B Acid dye Eosin 3. ...read more.

However his can cause the appearance of the parasite is much more distorted and therefore distinguishing between the different species can be much more difficult. From the thick film. Microscopic diagnosis can be difficult because the early trophozoites ("ring form") of the four variations look identical and it is never possible to diagnose species on the basis of a single ring form; species identification is always based on several trophozoites. Please refer to the chapters on each parasite for their microscopic appearances The biggest pitfall in most laboratories in developed countries is leaving too great a delay between taking the blood sample and making the blood films. As blood cools to room temperature, male gametocytes will divide and release microgametes: these are long sinuous filamentous structures that can be mistaken for organisms such as Borrelia. If the blood is kept at warmer temperatures, schizonts will rupture and merozoites invading erythrocytes will mistakenly give the appearance of the accolé form of P. ...read more.

Eos have a multilobate nucleus. 3. Basophil granulocytes are only seen occasionally. They are polymorphonuceated and their granules stain dark with alkaline stains, such as haematoxylin. They are further characterised by the fact that the granules seem to overlie the nucleus. Basophils are similar if not identical in cell lineage to mast cells, although no conclusive evidence to this end has been shown. Mast cells are "tissue basophils" and mediate certain immune reactions to allergens. 4. Lymphocytes have very little cytoplasm and a large nucleus (high NC ratio) and are responsible for antigen-specific immune functions, either by antibodies (B cell) or by direct cytotoxicity (T cell). The distinction between B and T cells cannot be made by light microscopy. 5. Plasma cells are mature B lymphocytes that engage in the production of one specific antibody. They are characterised by light basophilic staining and a very eccentric nucleus. 6. Other cells are white cell precursors. When these are very abundant it can be a feature of infection or leukemia, although the most common types of leukemia (CML and CLL) are characterised by mature cells, and have more of an abnormal appearance on light microscopy (additional tests can aid the diagnosis). ...read more.