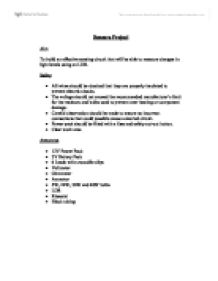 Build an effective sensing circuit that will be able to measure changes in light levels using an LDR.

Sensors Project Aim To build an effective sensing circuit that will be able to measure changes in light levels using an LDR. Safety * All wires should be checked that they are properly insulated to prevent electric shocks. * The voltage should not exceed the recommended manufacturer's limit for the resistors and bulbs used to prevent over heating or component damage. * Careful observation should be made to ensure no incorrect connections that could possible cause a shorted circuit. * Power pack should be fitted with a fuse and safety cut-out button. * Clear work area Apparatus * 12V Power Pack * 3V Battery Pack * 6 Leads with crocodile clips * Voltmeter * Ohmmeter * Ammeter * 5W, 24W, 36W and 48W bulbs * LDR * Rheostat * Black tubing Development To see how much the resistance of the LDR varies as light levels change I first made a small experiment to look at the actual resistance value changes. The distance between the LDR and the base of the bulb was kept constant, at 25.6cm. The bulb length for the majority of the bulbs was 5.8cm, although the 5W bulb had a much shorter length and so the difference in distance had to be accommodated for. ...read more.

If I were to do the experiments again I would conduct all of the tests in a room where there could be no background light to interfere with results. This would also mean that the level of light would always be the same whatever the time of day or weather conditions. Another problem with the first tests was that the range of bulbs was small, and the bulbs used varied in size. This meant that the distance from the LDR to the bulb could not be as accurately measured compared to if the experiment was done with same sized bulbs. If I were to do the experiments again I would try to use a large range of bulbs that were the same length. Also, when measuring the voltage across a resistor in one of the circuits the value of the resistor was always taken to be the manufacturers specified reading. However, this meant that as the resistor values can be 10% +/- the manufacturer's specification the comparisons between the different resistors may not have been accurate. If I were to do the experiments again I would use an ohmmeter to get the exact reading of each resistor to use to make sure that any relationships or comparisons made were completely accurate. ...read more.