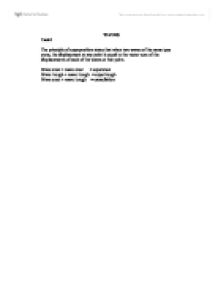 Carry out a two source superposition of laser light experiment using a double slit, and determine the wavelength.

The principle of superposition states that when two waves of the same type cross, the displacement at any point is equal to the vector sum of the displacements of each of the waves at that point.

To carry out a two source superposition of laser light experiment using a double slit, and determine the wavelength.

When the laser was turned on it diffracted at the two slits producing two waves.  Two source superposition took place as the waves overlapped travelling in the same direction.

The bright fringes on the screen called maximas were due to constructive superposition where the waves have arrived in phase.  For two waves to arrive in phase the path difference or ‘extra distance travelled’ must be equal to a whole number of wavelengths i.e. 1, 2, 3 etc.

The dark fringes are called minimas.  They separate the bright fringes and are due to deconstructive superposition.  The waves have arrived antiphase and

therefore the path difference between any two waves is not equal to a whole number of wavelengths, i.e. , 1, 2, etc.

The path differences for minimas and maximas on the screen increase from the central fringe.  The positioning is shown below.

The bright and dark fringes on the screen

The central fringe is the brightest, and also twice the width of the other fringes.

As the microwaves diffract at the metal plates, two sets of coherent waves are produced.  Microwaves travel from the point of diffraction to O in phase producing constructive superposition; this is the central maxima.  The path difference is zero.  The path difference increases from the central maxima by one whole wavelength for each subsidiary maxima.

If X is the first subsidiary maxima, the path difference must be equal to one whole wavelength.

Path difference to X needs to be calculated to determine the wavelength of the microwaves.

Microwaves wavelength are about 0.1m –1mm.

Increasing the width of the slits is not a good idea for increasing the intensity of the wave at the maxima, because the diffraction would be less.

The narrower the slit, the greater the diffraction.