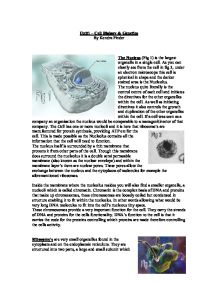 Unit1 - Cell Biology & Genetics By Kendra Pinder The Nucleus (Fig 1) is the largest organelle in a single cell. As you can clearly see from the cell in fig 3, under an electron microscope this cell is spherical in shape and the darker stained area is the Nucleolus. The nucleus quite literally is the control centre of each cell and initiates the directives for the other organelles within the cell. As well as initiating directives it also controls the growth and duplication of the other organelles within the cell. If a cell was seen as a company an organisation the nucleus would be comparable to a manager/director of that company. The Cell has one or more nucleoli and it is here that ribosome's are manufactured for protein synthesis, providing ATP etc for the cell. This is made possible as the Nucleolus contains all the information that the cell will need to function. The nucleus itself is surrounded by a thin membrane that protects it from other parts of the cell. Though this membrane does surround the nucleolus it is a double semi permeable membrane (also known as the nuclear envelope) and within the membrane layer's there are nuclear pores. These pores allow the exchange between the nucleus and the cytoplasm of molecules for example the aforementioned ribosomes. Inside the membrane where the nucleolus resides you will also find a smaller organelle, a nucleoli which is called chromatin. Chromatin is the complex basis of DNA and proteins that make up chromosomes, these chromosomes are loosely coiled but condensed in structure enabling it to fit within the nucleolus. In other words allowing what would be very long DNA molecules to fit into the cell's nucleous tiny space. ...read more.

It enables the cell to be able to move as needed. This is done by the microtubules within the cystskeleton sliding against each other causing the structure itself to move and bend. These micrtubules and microfilaments within the cytoskeleton also aid the process of exotysosis (the process by which the cell secretes vesicles out of the cell membrane containing proteins etc other parts of the body may need) also the microtubules play a key role in intracellular transportation ( specifically directing proteins to other parts of, or through internal cell structures) Golgi apparatus (fig 10 also fig 11) modifies simple molecules into more complex molecules and looks like flattened pancakes it is part of the membrane system within the cell. What look like flattened pancakes are actually small sacs that collect process and sort molecules such as proteins from rough ER by enclosing them into Golgi vesicles ready to transport to other parts of the cell or out of the cell in a process that is called secretion. The Golgi apparatus changes proteins for example and brings them to the cell surface membrane where they can be secreted; the secretion it brings to the surface can vary from hormones, enzymes antibodies and other molecules. It is comparable to a factory, its role is to package and to transport proteins from for example rough ER to the outside if the cell, Golgi bodies are made of membrane bound sacks known as Cisternae. Golgi vesicles are also used in the production of Lysosomes. As well as the functions that have been mentioned here also the Golgi is involved in lipid modification. The Golgi body normally resides between the nucleolus and the cell membrane, making it perfect for its function of transport as well as processing. ...read more.

However because it is going against the grade (molecules that are larger than the membranes will normally allow to pass through) a carrier molecule that helps produce energy for the cell (ATP) is required (fig 24) The ATP changes the shapes of proteins, allowing for the transfer of larger molecules across the membrane. Active transportation is vital to the diffusion process, as various cells within vital organs such as kidneys need to be reabsorbed into the blood after the filtering process is complete. Specialised Cell and its Function A sperm cell is a specialised cell. It has a very specific job to do. This is to reach and fertilise an egg (ovum) and to deliver it to the chromosomes and DNA needed to kick start the process of meiosis. As you can see from the photo (fig) the sperm cell is made up of three main sections. The head which contains the nucleus is encased in a cell membrane; inside of that membrane surrounding the nucleus itself is cytoplasm. The nucleus of the sperm cell (the control centre) contains information (DNA and Chromosomes) that is stored and then delivered into the ovum after fertilisation to construct the basic building blocks of the embryo. Also at the tip of the head within the membrane are special enzymes. These enzymes are used to help penetrate the eggs cell wall, allowing the sperm cell to enter in the first place. The second section being the tail, its sole function of this section is to rotate/move in such a fashion as to propel the sperm cell towards the stationary egg. Conclusion the sperm cell is perfectly suited for its specialised function, because it is preloaded with all the relevant DNA and Chromosomes to put in place the building blocks to create an embryo. ...read more.

*** This report appears to be a set of revision notes that has been well presented with good clear diagrams but there are a number of errors in key facts that should be corrected. References have listed but not cited in the text.
To improve
The student needs to ensure that key terms are spelt correctly throughout. The nucleus and the nucleolus are not the same thing and the student has mixed these terms up in a number of sentences.
It is important not to talk about animal cells having a cell wall.

The description of active transport is erroneous in a number of key facts. The student would need to review this section in particular.