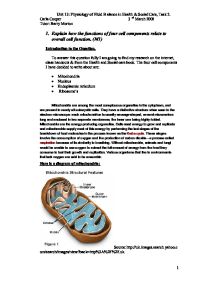 1. Explain how the functions of four cell components relate to overall cell function. (M1) Introduction to the Question. To answer this question fully I am going to find my research on the internet, class handouts & from the Health and Social care book. The four cell components I have decided to write about are: * Mitochondria * Nucleus * Endoplasmic reticulum * Ribosome's Mitochondria are among the most conspicuous organelles in the cytoplasm, and are present in nearly all eukaryotic cells. They have a distinctive structure when seen in the electron microscope: each mitochondrion is usually sausage-shaped, several micrometres long and enclosed in two separate membranes, the inner one being highly folded. Mitochondria are the energy-producing organelles. Cells need energy to grow and replicate and mitochondria supply most of this energy by performing the last stages of the breakdown of food molecules in the process known as the Krebs cycle. These stages involve the consumption of oxygen and the production of carbon dioxide-a process called respiration because of its similarity to breathing. Without mitochondria, animals and fungi would be unable to use oxygen to extract the full amount of energy from the food they consume to fuel their growth and replication. ...read more.

In animals and plants each chromosome is doubled but remains joined at one point. When the DNA molecule is stripped of bound proteins it consists of two strands which are joined together in a double helix. Each individual thread is joined up end to end by a long string of units. There are four individual units of DNA they are labelled A, T, G and C, which stand for the identifying bases for each unit, adenine, thymine, guanine and cytosine. Nucleus is the "brain" of the cell and is contained within the nuclear membrane (which insures that the interior of the nucleus is isolated from the cells cytoplasm allowing two different environments to be maintained) it contains pairs of chromosomes each carrying hereditary DNA (Toole, G & S: 1984) the nucleus controls every organelle with the Cytoplasm. Within the nucleus is the Nucleolus, It is a small structure within the nucleus that forms ribosome's which then pass into the cytoplasm to produce protein (Moth.E: 2003). The cell membranes is a fine membrane made of protein and lipids, it has two functions to keep the cytoplasm and the nucleus in. Endoplasmic Reticulum: The endoplasmic reticulum is found in the cytoplasm of the cell and like the plasma membrane is composed of phospholipids and protein. ...read more.

Here is a diagram of a ribosome: Source: http://uk.images.search.yahoo.com/search/images/view?back=http%3A%2F%2F.uk Ribosome's existed in two distinct forms; free and bound and may be positioned in several locations throughout the cell depending on cell function. Free ribosome's can occur individually, a monosome, or in clusters called polyribosome's or polysomes and are found in the cytosol (the fluid component of cytoplasm, excluding organelles and the insoluble, usually suspended, cytoplasmic components). Found in greater concentrations in cells that retain proteins, they manufacture proteins that are either held in solution in the cytoplasm or those used in the formation of cytoplasmic structural and motile elements. Bound ribosome's are situated on the outside of the endoplasmic reticulum1[1] forming rough ER (RER) and a large number are seen in cells that make proteins to be secreted out of the cell, such as pancreatic cells producing digestive proteins. The bound ribosome's form proteins that may be utilised for the cell membrane, packaged into vesicles for storage, as well as those required for export from the cell (http://users.rcn.com/jkimball.ma.ultranet/BiologyPages/R/Ribosomes.html). Ribosomes are also located in mitochondria and chloroplasts within eukaryotic organisms, these are smaller than those found in the cytoplasm and can be compared to bacterial ribosomes. ?? ?? ?? ?? Unit 13: Physiology of Fluid Balance in Health & Social Care, Task 2. Carla Cooper 3rd March 2008 Tutor: Barry Morton 1 ...read more.