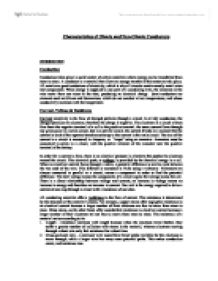 Conduction takes place in solid matter of certain materials where energy can be transferred from atom to atom. A conductor is a material that allows an energy transfer of this nature to take place. All metals are good conductors of electricity, which is why all circuits contain mostly metal wires and components. When energy is supplied to one part of a conducting wire, the electrons in the wire move from one atom to the next, producing an electrical charge.  Semi-conductors are elements such as Silicon and Germanium, which do not conduct at low temperatures, and whose conductivity increases with the temperature.

The relationship between current, voltage and resistance

The relationship between current, voltage and resistance is expressed in Ohm’s Law, named after the physicist who discovered it. In the year 1826, George Simon Ohm conducted some experiments regarding current in conductors. As a result of these experiments he arrived at the conclusion that the current flowing through a metal wire is proportional to the potential difference across it (providing the temperature remains constant).

Ohm’s law applies to metal conductors as well as certain other materials, and is obeyed provided that, not only the temperature, but all physical conditions remain constant. For example, the resistance of certain conductors will vary if they are bent or placed near a strong magnetic field. Certain conducting materials disobey ohm’s law entirely. These are mainly semiconductors and gases.

The conductivity of semiconductors such as Silicon (Si) can be increased by adding small, controlled amounts of impurities that have roughly the same atomic size that the semimetal itself. This process of adding impurities to increase conductivity is known as doping.