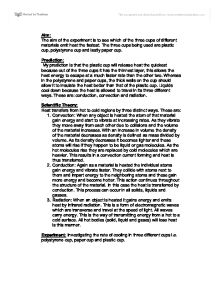 Aim: The aim of the experiment is to see which of the three cups of different materials emit heat the fastest. The three cups being used are plastic cup, polystyrene cup and lastly paper cup. Prediction: My prediction is that the plastic cup will release heat the quickest because out of the three cups it has the thinnest layer, this allows the heat energy to escape at a much faster rate than the other two. Whereas in the polystyrene and paper cups, the thick walls on the cup should allow it to insulate the heat better than that of the plastic cup. Liquids cool down because the heat is allowed to travel in its three different ways. These are: conduction, convection and radiation. Scientific Theory; Heat transfers from hot to cold regions by three distinct ways. These are: 1. Convection: When any object is heated the atom of that material gain energy and start to vibrate at increasing rates. As they vibrate they move away from each other due to collisions and the volume of the material increases. With an increase in volume the density of the material decreases as density is defined as mass divided by volume. ...read more.

The results at 60�C were 1.54, 2.10 and 1.34 and at 50�C they were 0.85, 1.10 and 0.95. These results do not match the predictions made in the hypothesis which stated that the polystyrene would lose heat at the slowest rate. The only sets of results that follow the prediction are the results obtained at 50�C. Evaluation There are a few ways that my experiment could be improved, one of the ways of improving it could be to put lids on top the cups, this would mean that the convection currents only come out of the sides of the cups, and would make the experiment more accurate. Another way of improving the experiment is we could have used a syringe instead of a cylinder for measuring 100cm cubed, as the cylinder is +/- 1cm, using a syringe would mean that the cups would all have pretty much exactly the same amount of water each, this would make the experiment a little more accurate than the method I chose of measurement as my method is not quite as accurate. Also, I could have done all three experiments together (at the same time) this would make the experiment fairer as the room temperature could change if done at different times. ...read more.

Although there are ways to make the experiment better, they are all shown in the evaluation. Considering the method used, from the data I collected, I am happy with all of the results. If I was to do the experiment again I would do the experiment five times instead of three this would make the experiment more accurate and reliable. There is not a lot of scatter on my graphs, which means that my conclusion is quite accurate. The temperatures on each time are similar especially between the paper cup and the plastic cup. I think that my conclusion is the right one, looking at the curves they are quiet near to each other this means that my results are accurate and the conclusions are correct. From what I know using different cups at home it backs up what the conclusion has given. There is a trend in my results they are all quite similar looking at my results I can confidently say the following; when the time increases the temperature of the water goes down. The apparatus, which was used, was used to the best of its abilities, there are some apparatus that was not supplied such as an electrical thermometer and a syringe which if used could have made the experiment better and the conclusion more reliable. Polystyrene Cup is the best insulator/Paper Cup cooled the fastest ...read more.