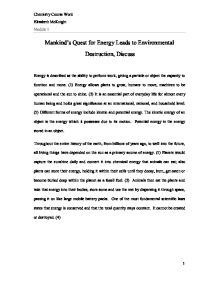 Mankind's Quest for Energy Leads to Environmental Destruction, Discuss Energy is described as the ability to perform work, giving a particle or object the capacity to function and move. (1) Energy allows plants to grow, humans to move, machines to be operational and the sun to shine. (2) It is an essential part of everyday life for almost every human being and holds great significance at an international, national, and household level. (5) Different forms of energy include kinetic and potential energy. The kinetic energy of an object is the energy which it possesses due to its motion. Potential energy is the energy stored in an object. Throughout the entire history of the earth, from billions of years ago, to well into the future, all living things have depended on the sun as a primary source of energy. (1) Planets would capture the sunshine daily and convert it into chemical energy that animals can eat; also plants can store their energy, holding it within their cells until they decay, burn, get eaten or become buried deep within the planet as a fossil fuel. (2) Animals then eat the plants and take that energy into their bodies, store some and use the rest by dispersing it through space, passing it on like large mobile battery packs. One of the most fundamental scientific laws states that energy is conserved and that the total quantity stays constant. ...read more.

(3) Environmental problems arising from these particular fuels, firstly coal, is in the extraction. Most coal seams are buried deep underground and mining can be detrimental to the minors through suffocation, gas poisoning, roof collapse and gas explosions due to build up of toxic, volatile gases and lack of oxygen. (4) For example, the Farmington coal mine disaster killing 78 people in 1968 and more recently; April 2010 West Virginia coal mine explosion killed 25 People. (6) Surface mining completely eliminates vegetation, destroys wildlife, degrades air quality, ruins current land uses, and completely alters the topography of the area leaving it scarred and with no scenic value. (4) Other pollutants, especially in coal combustion, are the ashes that either escapes into the atmosphere or is left behind and must be discarded. This coal ash contains significant amounts of lead, mercury, arsenic, or other compounds and heavy metals. (4) Whether air borne or in bulk, coal ash can therefore be a serious environmental hazard. For example, contamination of land and waterways and destruction of homes from fly ash spills such as the Kingston fossil plant coal slurry spill in Tennessee. When coal is burned into ash, uranium and thorium is concentrated up to ten times their original levels; in this disaster radiated sludge poured into the Emory River. (7) In the exothermic reaction of burning fossil fuels three main products are formed, carbon dioxide (CO2), water (H2O) ...read more.

(4) Nuclear energy also does not emit greenhouse gases and materials are abundant. On a downside the power stations are expensive to build, are volatile and dangerous,(4) for example the Chernobyl disaster in Ukraine in 1986. Finally, creating this nuclear power produces radioactive waste that is so dangerous it must be stored underground for thousands of years before it will become safe. (4) Cleaner options for energy sources come in the form of renewable. They help fight against global warming as they do not give out pollutants,(3) but they do come with their own detrimental problems. Some take up large areas of land; wind farms can be very noisy, unsightly and can cause danger to wildlife. (4) Whether it is solar, water, wave or geothermal power, they all lack the efficiency of fossil fuels, production and maintenance is also very expensive leading to debates around the monetary cost in relation to the cost to the environment. (11) Efficiency and advances in the extraction techniques and refining, clean coal technology (where coal is washed of impurities), carbon capture and sequestering (carbon is liquidized and pumped deep underground) is a small step forward in the search to save the planet and mankind from the distinction of fossil fuels. Utilizing renewable sources to their full potential, the newly created wind farm of the UK coast,(12) building hybrid cars and halving carbon foot prints. (11) All are solutions to the impact of man's need for energy. The most important aspect is research and finding new ways to create clean, efficient energy. ...read more.