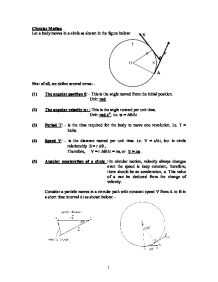 Let a body moves in a circle as shown in the figure below:

(5)        Angular acceleration of a circle :-In circular motion, velocity always changes even the speed is keep constant, therefore, there should be an acceleration, a. This value of a can be deduced from the change of velocity.

Consider a particle moves in a circular path with constant speed V from A to B in a short time interval Δt as shown below: -

The change of velocity from A to B is denoted in the vector diagram as ΔV such that:    ΔV = VB  -  VA

(II)        The acceleration is pointing to the centre, which is therefore known as centripetal acceleration.

(III)        According to Newton's 2nd law, acceleration is due to force, namely the resultant force

This is known as the centripetal force

(IV)        We must be clear of the cause -result relationship. i.e. we must have centripetal force first, this produces a centripetal acceleration which couples with a tangential velocity to start the circular motion.

(V)        In our usual calculation, we must consider the net force acting on the "free body diagram' of the rotating object  being the centripetal force.

(i)        Motion of Bicycle Rider Round Circular Track

The centripetal force is provided by frictional force F 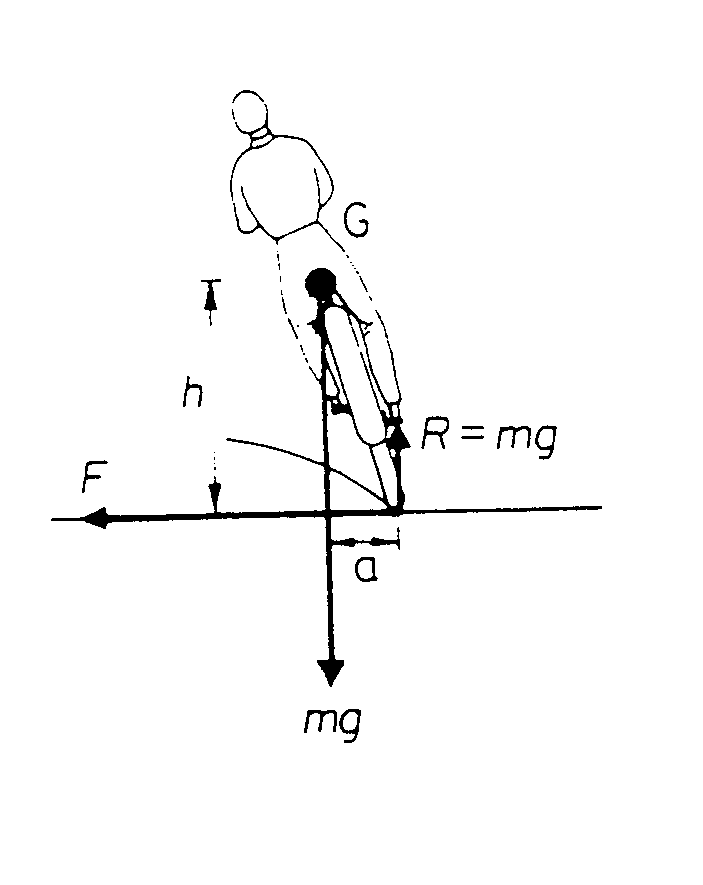 Where θ is the angle of inclination to the vertical?

This means that the quicker the velocity to turn a sharp angle the larger is θ (bend dipper) if the frictional force is not enough to provide centripetal force, skidding occurs.

(ii) Motion of car (or Train) Round Circular Track

Suppose a car (or train) is moving with velocity V round a horizontal circular track of radius r, and let R1 and R2 be the respective normal reactions at wheels And B, while F1 and F2 are the corresponding frictional forces. 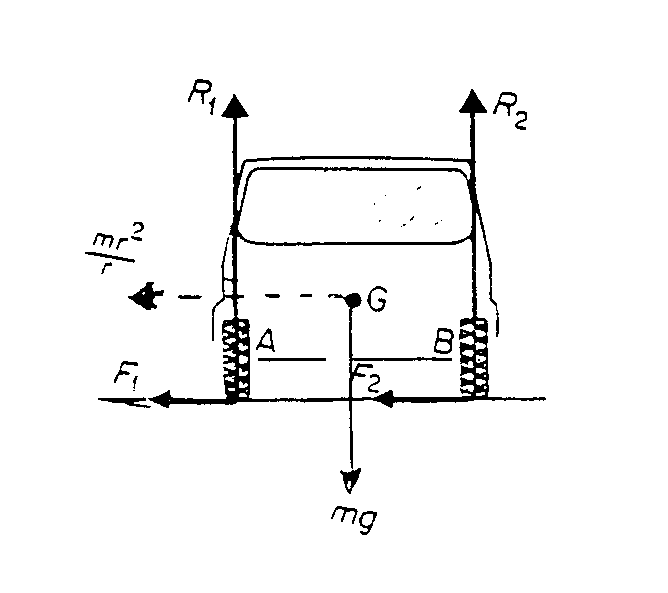 The centripetal force is provides by friction

For the car not to be overturn, sum of all moments about G = 0

(2)        For racing car, the value of V is inevitably large, and the corner is inevitably sharp, the design is such as to maintain  V2 < arg/h

Therefore, a  must be large, and h must be small, and the tyres are as wide as possible in order to get enough friction for turning.

Suppose a car is moving round a banked track in a circular path of radius r, if the road is very slippy, the only forces acting on the wheels are the normal reactions R1 and R2. The centripetal force is provided by the component of (R1 + R2)

For vertical equilibrium to occur:

(2)        The design of a racing track is not linear but curved upwards with θ increasing outwards because as the car is moving too fast and turnning too sharp, the car will skid outwards, the larger value of θ outwards provides a larger centripetal force. 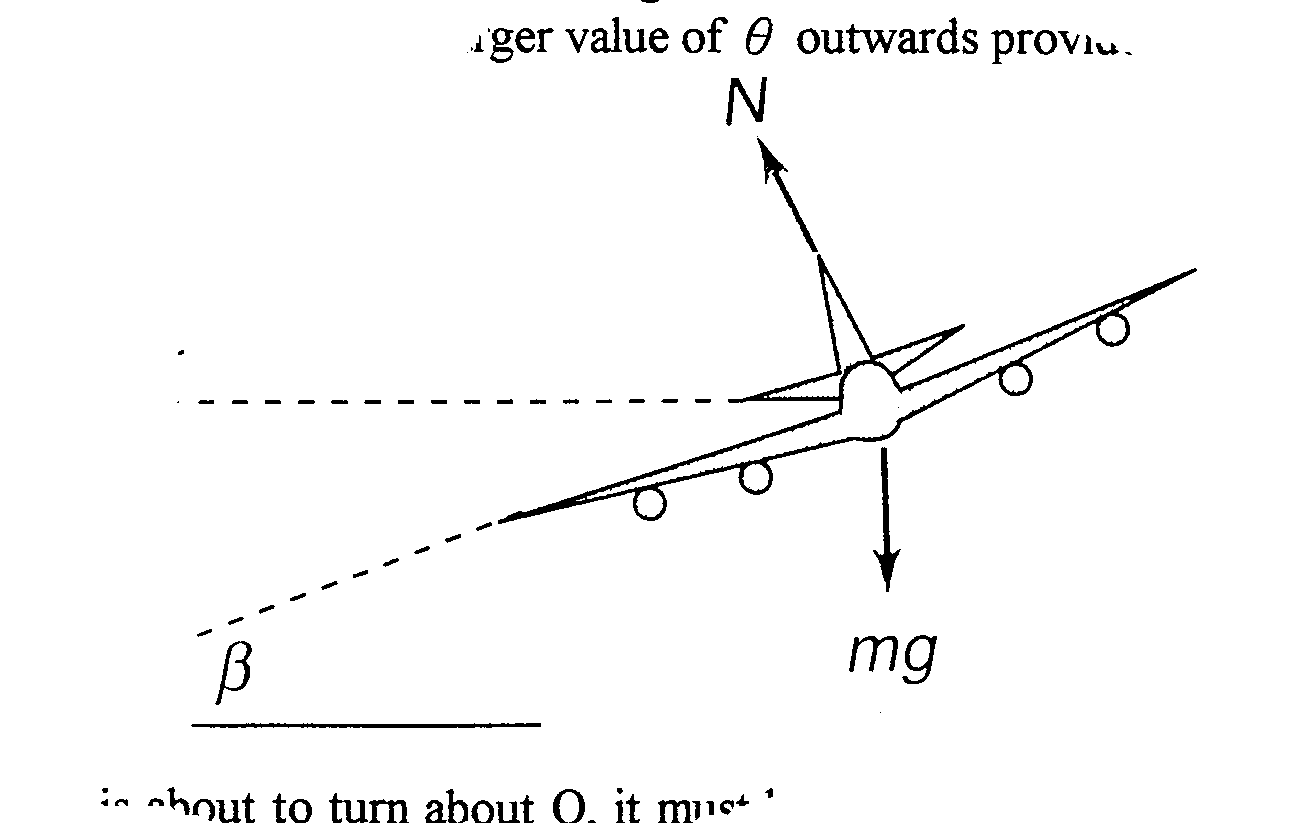 When an aeroplane is about to turn about O, it must be tilted at an angle θ to the vertical because, the centripetal force is provided by the horizontal component of the uplifting force N.i.e.

A bucket of water is looping in the loop, at its highest point A, the centripetal force is provided by mg, i.e. 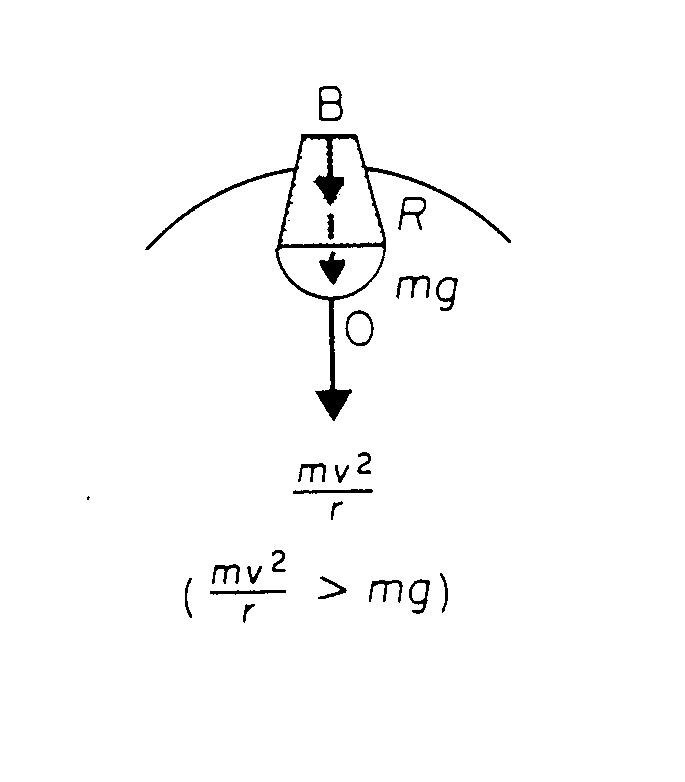 V < (gr)1/2, then mg > mV2/r i.e. the weight is not completely used in the centripetal force, the used part of the weight causes the water to leave the bucket.

(3)        If V > (gr)1/2 i.e.  mg < mV2/r, that means mg is not large enough to provide the required centripetal force, hence, water will press the bottom of the bucket. Then the bucket will provide a normal reaction N, so that

1.        (a)        Write down the Newton's law of motion. Apply to the situation where a body, initially at rest, is subject to a constant force, and describe the subsequent motion.

(b)        Clearly distinguish the difference between "mass' and 'weight' of a body and explain why a passenger sometimes has the feeling of 'weightlessness' in a lift.

(c)        Without giving any mathematical derivations, explain how it is possible for a body to move with constant speed in a horizontal circular path.

(d)        Describe an experiment demonstrate the relation between the angular velocity of the body in (c) and the radius of the path, for a constant acting force, explain any source of error.

(a)        The rate of change of momentum produce in a body is proportional to the resultant force acting on it and occurs in the direction of the force.

∴When a body, initially at rest is subject to a constant force, the body will move with constant acceleration in the direction of the force.

(b)        The mass of a body 'm' is a measure of the inertia of the body and is a constant. The weight 'W' of a body is the force due to the gravitational pull, which is variable from place to place.

(c)        A constant centripetal force acts towards the centre O of a circle provides an acceleration in this direction for a rotating body. The centripetal force changes only the direction of the motion but not it's magnitude, therefore, the speed V is constant.

(1)        One student holds the glass tube vertically and whirls the bung around above his head, and the speed of the bung is increased until the marker is just below the tube.

relation between l and ω (angular velocity) can be obtained as follow:

Since, T and mg are constant, therefore, θ is also a constant.

The figure below shows a car travelling over a hump, which is an arc of a vertical circle. Compared with travelling on a level road, would a passenger feel heavier, lighter or same as usual when the car passes the top of the hump? Explain your answer. (Assume that the passenger remains in contact with the seat).

A Centrifuge consists of a test tube in a casing,  which is freely hinged at a point B and rotates rapidly at angular velocity ω about the axle C. 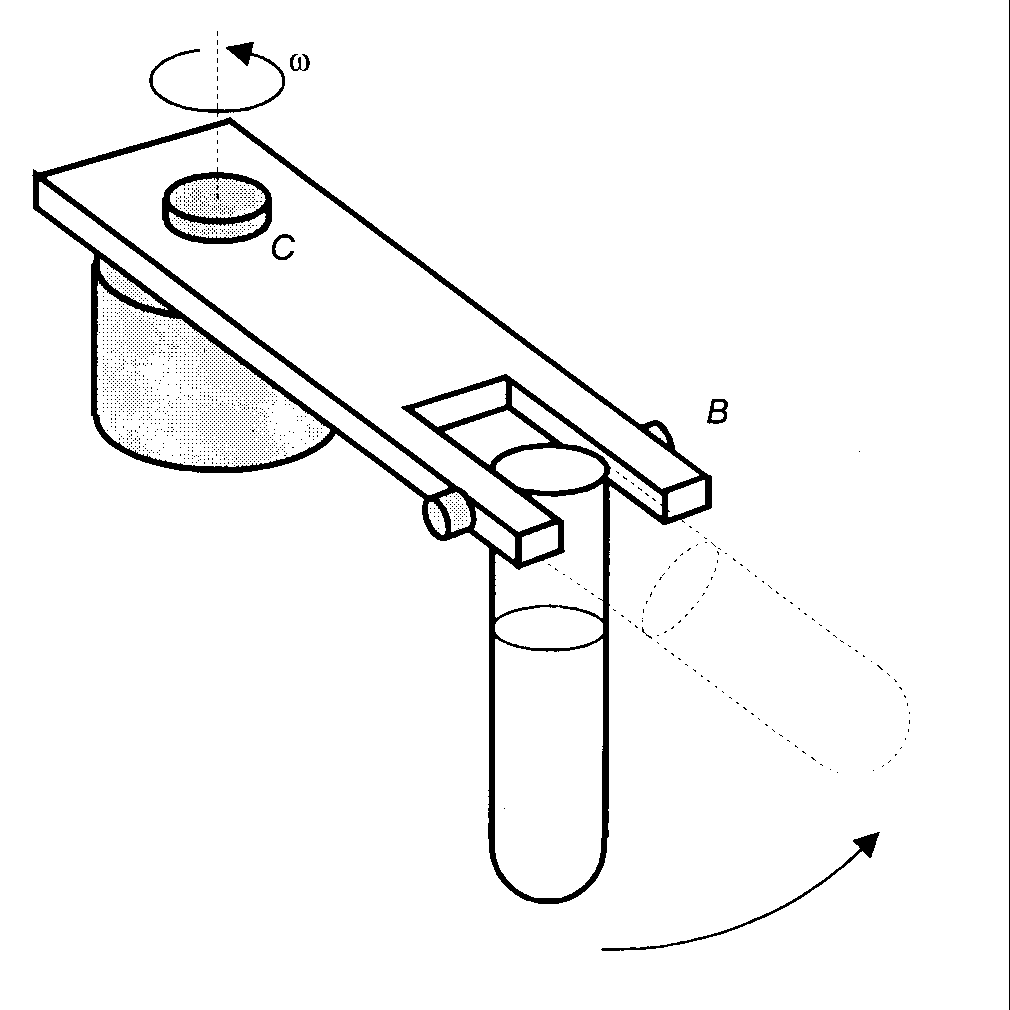 From the diagrams (a) below: 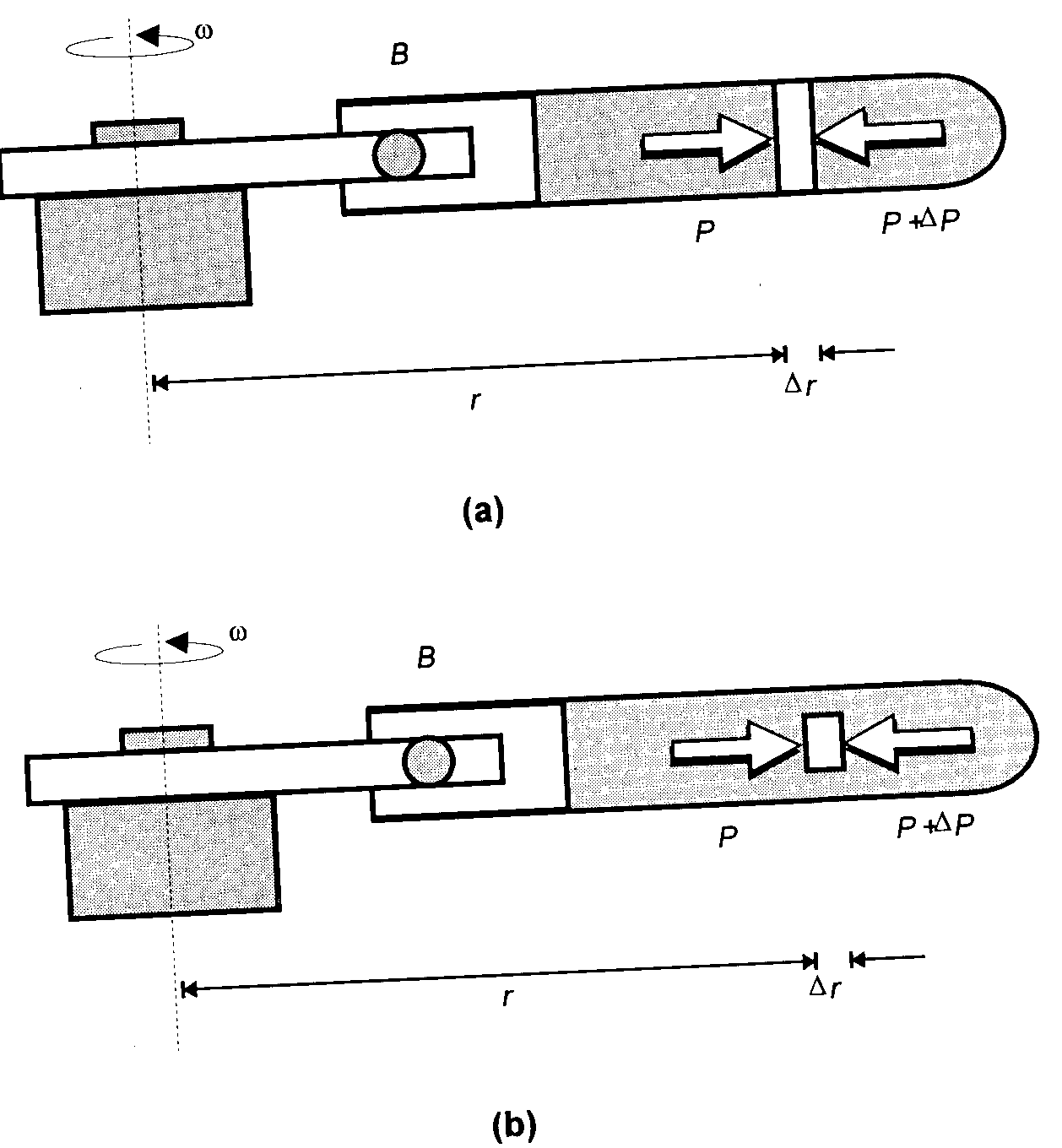 where A is the cross-sectional area of the tube.

where m = ρΔrA is the mass of this small volume of liquid. So,

This shows that when the tube is rotating the pressure increases towards the bottom of the tube.

where A' is the cross-sectional area of this liquid block.

This excess force has 2 properties:

We know that the liquid of lower density will float naturally to the top and that of higher density will sink to the bottom, but the process is very slow.  The excess force in the centrifuge will speed up this process.