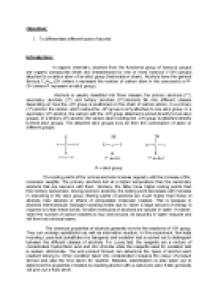 ï»¿Objective: 1. To differentiate different types of alcohol. Introduction: In organic chemistry, alcohols from the functional group of hydroxyl groups are organic compounds which are characterized by one or more hydroxyl (−OH) groups attached to a carbon atom of an alkyl group (hydrocarbon chain). Alcohols have the general formula CnH2n+1OH (where n represent the number of carbon atom in the compound) or R-OH (where R represent an alkyl group). Alcohols is usually classified into three classes, the primary alcohols (1°), secondary alcohols (2°) and tertiary alcohols (3°).Alcohols fall into different classes depending on how the -OH group is positioned on the chain of carbon atoms. In a primary (1°) alcohol, the carbon which carries the -OH group is only attached to one alkyl group. In a secondary (2°) alcohol, the carbon with the -OH group attached is joined directly to two alkyl groups. In a tertiary (3°) alcohol, the carbon atom holding the -OH group is attached directly to three alkyl groups. The attached alkyl groups may be from the combination of same or different groups. R = alkyl group The boiling points of the normal alcohols increase regularly with the increase of the molecular weights. The primary alcohols boil at a higher temperature than the secondary alcohols that are isomeric with them. Similarly, the latter have higher boiling points than their tertiary isomerides. ...read more.

When tertiary alcohol is tested in the other hand, the solution will turn cloudy immediately. The speed of this reaction is proportional to the energy required to form the carbocation. The reaction rate is faster when the carbocation intermediate is more stabilized by greater number of electron donating alkyl group (R-) bonded to the positively charged carbon atom while less substituted alcohol reacts much more slowly. Thus, a tertiary alcohol reacts fastest followed by secondary alcohol while primary alcohol generally reacts very slowly. From the experimental results obtained, we know that 2-methyl-2-propanol is a tertiary alcohol (3° alcohol) because this alcohol reacts immediately when Lucas reagent is added to form 2 layered-solution which is cloudy. 2-butanol is a secondary alcohol (2° alcohol) where it took around 7 minutes to form a cloudy solution while n-butanol and alcohol X are primary alcohols (1° alcohol) as they did not react significantly after 15minutes. The equations for the reactions of different alcohols used are as below:- 2-methyl-2-propanol (3° alcohol): ZnCl2 (CH3)3COH + HCl (CH3)3CCl + H2O (2-methyl-2-propanol) (2-chloro-2-methylpropane) 2-butanol (2° alcohol): ZnCl2 CH3CH(OH)CH2CH3 + HCl CH3CHClCH2CH3 + H2O (2-butanol) (2-chlorobutane / 2-butyl chloride) n-butanol (1° alcohol): ZnCl2 CH3CH2CH2CH2OH + HCl CH3CH2CH2CH2Cl + H2O (n-butanol) (1-chlorobutane / n-butyl chloride) Despite the fact that the experimental results obtained are accurate, 2-butanol took a longer time to react as compared to the theoretical results where it should react in within 5 minutes. ...read more.

Besides, addictive need to be added to the ester to produce a stronger pleasant, often fruit smell. Esters are widely used in the fragrance and flavour industry. It is also used in the organic chemistry for the test of alcohols and carboxylic acid. The equation of the chemical reaction that occurred is shown as follows: Concentrated HCl CH3CH2OH + CH3COOH CH3COOCH2CH3 + H2O (Ethanol) (Ethanoic acid) ? (Ethyl ethanoate) Precautionary steps: 1. Keep all the alcohols from any source of fire as alcohols are highly flammable. 2. All the unused or used waste materials must be poured into a specific waste container prepared in the fume chamber to prevent pollution to the environment. 3. Cautions must be taken when pouring concentrated sulphuric acid as it is toxic and is destructive to mucus membrane. 4. 2-methyl-2-propanol is harmful if inhaled. May cause skin and respiratory irritant. Severe eye irritant. 5. All transfer of chemicals should be done in the fume chamber to avoid inhalation of any chemicals vapour as it may cause severe sickness such as cancer. Conclusions: From the experiment, it can be concluded that n-butanol and the unknown alcohol X are primary alcohol, 2-butanol is a secondary alcohol and 2-methyl-2-propanol is a tertiary alcohol. Primary alcohol will undergo oxidation but react slowest in halogen substitution reaction. Secondary alcohol in the other hand undergoes oxidation reaction but will react with a medium speed under halogen substitution reaction. Tertiary alcohol will not undergo oxidation reaction but will react almost immediately in halogen substitution. Alcohols will react with carboxylic acid to form an ester. ...read more.