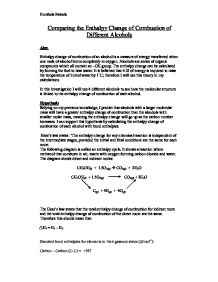 Goggles and a lab coat will be worn throughout the whole experiment to keep my eyes and my skin from being damaged. I will repeat this experiment with each alcohol three times to make sure that my results are reliable. I will then record my results in a table and find an average mass used to heat the water for each. Safety: Methanol is toxic. It can irritate the eyes and mucous membranes. It can also react vigorously with oxidising materials. That is why, to keep safe, me and my fellow students should take care when handling it to make sure it's not spilled since it can react with substances. Also none of us should stay exposed to it for too long to prevent our skin, eyes and mucous membranes being irritated. Ethanol is a highly flammable chemical. Its vapour can easily catch fire; also inhalation may cause narcotic effects. That's why the spirit burners should be kept well away from naked flames and used in well ventilated classrooms. Propanol is also highly flammable and can irritate skin. Therefore, it should be kept away from any naked flames and handled with gloves on, if available. Butanol is harmful and flammable. It can easily catch fire; that is why I should take care when using it, including keeping it away from naked flames. Fair test: To make this investigation a fair test, I will make sure I control various factors. ...read more.

Percentage error: % error = Error x 100 Expected Result Methanol: 42/726.0 = 0.057851239 x 100 = 5.78 % Ethanol: 545.2/1367.3 = 0.398742046 x 100 = 39.87% Propanol: 728.7/2021.0 = 0.360564077 x 100 = 36.05% Butanol: 2005.8/122.2 = 16.41407529 x 100 = 1641.40% EVALUATION Looking at my investigation, I identified a number of limitations that could have led to the errors shown in my results. > Heat could have been lost to the surroundings since there was nothing around the apparatus, where draft excluders could have been placed to prevent that loss. > Since some of the alcohols have toxic fumes, the room had to bee well ventilated for our safety; that could have resulted in heat loss also. > The thermometer was left for me to read which means there could have been a slight human error. An electric thermometer could have been used; which could record the peak temperature, so no errors would be made during the reading taking. > The soot at the bottom of the calorimeter could have been acting as an insulator and stopping the efficient energy transfer. > A conclusion cannot be drawn about every alcohol because none of the isomers were used. > If I was to do this investigation again, I would take into account all the factors mentioned above and also to extend it, I would use a wider variety of alcohols(e.g. up to hexanol) and also try and do it with some isomers(e.g.Propan-2-ol). Fumilola Fawole ...read more.