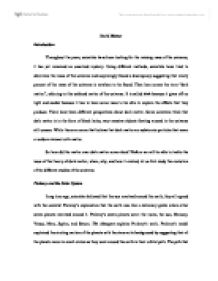 So how did the matter over dark matter come about? Before we will be able to tackle the issue of the theory of dark matter, when, why, and how it existed, let us first study the evolution of the different studies of the universe.

Ptolemy and the Solar System

Long time ago, scientists believed that the sun revolved around the earth, they all agreed with the scientist Ptolemy’s explanation that the earth was like a stationary globe where other seven planets revolved around it. Ptolemy’s seven planets were: the moon, the sun, Mercury, Venus, Mars, Jupiter, and Saturn. The Almagest explains Ptolemy’s work. Ptolemy’s model explained the circling motion of the planets with the stars as its background by suggesting that all the planets move in small circles as they went around the earth in their orbital path.

For long, Newton’s Laws seemed to be sensible with almost all kinds of matter. However, Einstein and a few other scientists found some exemptions to these laws, including very small (like electrons), very massive particles like black holes and very fast (like accelerator particles). However, there are some particles that do not belong to any of these categories, and this led to the idea of the dark matter.

The Universe and the Discovery of Dark Matter

Our solar system is only a part of a galaxy called the Milky Way. A galaxy is made up of billions of stars, gas, and dust. And way beyond our own galaxy are other galaxies, billions of them.  They are all in motion, and they make up our great universe.

All galaxies are held together by gravity. The force of gravity should be strongest at the center where most of the matter is concentrated, there in the pack of heavy stars. Our Milky Way is a spiral galaxy; it has a center where stars are packed closely together, and a somewhat flat disk that spreads out-still made up of stars and dust.

In 1932, a scientist named Jan Oort claimed that not all of the motion of the galaxies can be explained so easily. He found out about this when he was trying to measure the gravitational pull of the Milky Way’s disk on its nearby stars. To his surprise, the mass that he got was twice the mass of the stars and other heavenly bodies that he could see.

Still in the 1930s, a scientist by the name of Fritz Zwicky found another puzzle. While he was studying the movement of galaxies as they moved about in clusters, he noticed that they were moving faster than their gravity could handle.

The Big Bang Theory was born in the 1950s and it says that the universe began with a giant explosion. The Big Bang theory is the new model of the origin of the universe. It further says that all the things in the universe before was a giant clump of matter. After the giant explosion, or the Big Bang, the matter was distributed evenly in all directions. Then, attracted by gravity, the matter started to clump and form what we see now as the planets and the stars. However questions like how did the clumping begin and what started it started to arise. Some scientists take the WIMPs as an answer. They must have triggered the clumping, since they only interact with baryonic matter gravitationally.