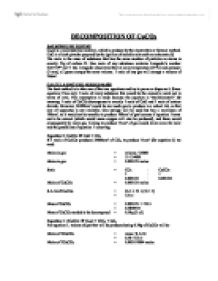 Cu2O is a red crystalline material, which is produce by the electrolytic or furnace method. CuO is a black powder prepared by the ignition of suitable salts such as carbonate (1)

The mole is the mass of substance that has the same number of particles as atoms in exactly 12g of carbon-12. One mole of any substance contains Avogadro’s number 6.02×10²³ molˉ1 (2).Avogadro discovered that at room temperature (25°C) and pressure (1 atm), all gases occupy the same volume. 1 mole of any gas will occupy a volume of 24dm³.

The best method is to take one of the two equations and try to prove or disprove it. Since equation 2 has only 1 mole of every substance this would be the easiest to work out in terms of ratio. This assumption is made because the equation is “stoichiometric” (3) meaning 1 mole of CuCOз decomposes to exactly 1 mole of CuO and 1 mole of carbon dioxide. However, 24000cm³ would be too much gas to produce in a school lab, as that size of apparatus is not available. Gas syringe will be used but has a maximum of 100cm³, so it would not be sensible to produce 100cm³ of gas because if equation 1 turns out to be correct (which would mean oxygen will also be produced), and there would consequently be more gas. Aiming to produce 75cm³ of gas would leave room for error and the possibility of equation 1 occurring.

For equation 1, volume of gas that will be produced using 0.39g of CuCOз will be:

WHICH EQUATION IS CORRECT?

Care must be taken when dealing with Bunsen burner to avoid been burnt.