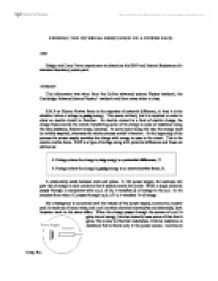 Design and Carry Out an experiment to determine the EMF and Internal Resistance of a standard laboratory power pack.

FINDING THE INTERNAL RESISTANCE OF A POWER PACK AIM Design and Carry Out an experiment to determine the EMF and Internal Resistance of a standard laboratory power pack. THEORY This information was taken from the Collins advanced science Physics textbook, the Cambridge Advance Science Physics 1 textbook and from notes taken in class. E.M.F or Electro Motive Force is the opposite of potential difference, in that; it is the situation where a voltage is gaining energy. This seems unlikely, but it is required in order to allow an electric circuit to function. An electric current is a flow of electric charge, the charge flows around the circuit, transferring some of its energy to areas of resistance along the way (resistors, filament lamps, buzzers). At some point along the way the energy must be initially supplied, otherwise the whole process couldn't function. At the beginning of the process the power supply provides the charge with energy to pass to the circuit. This is the electro-motive force. EMF is a type of voltage along with potential difference and these are defined as: A Voltage where the charge is losing energy is a potential difference, V. A Voltage where the charge is gaining energy is an electromotive force, E. A relationship exists between volts and joules. A 10v power supply, for example, will give 10J of energy to each coulomb that it pushes round the circuit. ...read more.

need be worn, however, it should be noted that the rheostat will become very hot after power is put through it, and must be left to cool down before handling it. FAIR TEST In order to make this experiment a fair test, several factors have been taken into consideration to make the experiment accurate. Firstly all of the same equipment will be used throughout the investigation, as this will affect the results from the power pack. The rheostat will be allowed to cool down in between experiment repeats, to make sure that the temperature is not affecting the results in any way, and finally, the same number of results will be taken from each repetition, as this will be used on the table to calculate the gradient and will be the basis of the results. DIAGRAM PREDICTION I predict that, based on my initial research, the resistance will become reduced as the current is increased; this should not affect the internal resistance, which (hopefully) will remain the same. The e.m.f should also be slightly higher than the stated voltage on the power pack, as the e.m.f is the highest value for energy. Method 1. Set up the apparatus up as shown in the above diagram. 2. Set the rheostat to it's minimum value 3. Make note of the results on both the ammeter and the voltmeter 4. Increase the current using the rheostat and take at least 5 more readings. ...read more.

This provides an evidential mark of consistency for this method of data collection. I noticed during the collection of results there was instability in the voltmeter and ammeter of ? 0.2v and ? 0.1v respectively. This, obviously lead to certain mistakes being made through a simple case of choosing the wrong result, therefore leading to a error range of 4 volts and 2 amps. I have included a graph of current against potential difference, which includes error bars; this shows how the fluctuation on the voltmeter can have an effect on the results accumulated. There was also an issue when trying to take reading at low temperatures; this was due to a reduced sensitivity on the rheostat. The result of this incident was that the accuracy of results at low voltages has a greater error range. This cannot be displayed on the graph as there is no direct indication as to the new error ranges. If I could get an opportunity to repeat this investigation in ideal conditions I would use a rheostat with a greater range of selections, this (hopefully) would reduce the error on lower voltages. There were many limitations that I encountered during the conduction of this experiment; mainly this involved the equipment and digital readouts. Replacing these with significantly more accurate pieces of equipment would reduce the error range for the gradient, therefore giving more accurate final results. I would also spend a lot more time on taking many more results, especially in the lower voltages, as this would help in reducing the amount of error from the rheostat. ?? (Footnote continued) Greg Rogers ...read more.