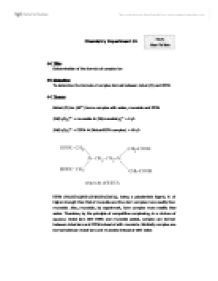 Determination of the formula of complex ion

Chemistry Experiment 31 (a) Title: Determination of the formula of complex ion (b) Objective: To determine the formula of complex formed between nickel (II) and EDTA (c) Theory: Nickel (II) ion (Ni2+) forms complex with water, murexide and EDTA [Ni(H2O)6]2+ + murexide ==> [Ni(murexide)6]4- + H2O [Ni(H2O)6]2+ + EDTA ==> [Nickel-EDTA complex] + 6H2O EDTA (HO2CCH2)2NCH2CH2N(CH2CO2H)2), being a polydentate ligand, is of higher strength than that of murexide and thus form complex more readily than murexide. Also, murexide, by experiment, form complex more readily than water. Therefore, by the principle of competitive complexing, in a mixture of aqueous nickel ions with EDTA and murexide added, complex are formed between nickel ions and EDTA instead of with murexide. Similarily complex are formed between nickel ions and murexide instead of with water. Below are the colours of the different species in this experiment. Species Colour EDTA Colourless Murexide Dark Purple Nickel-water complex Green Nickel-murexide complex Yellow Nickel-EDTA complex Pale Blue In order to determine the formula of the Nickel-EDTA complex [Ni(EDTA)y] where y is a positve interger, the mole ratio of the reaction between Ni and EDTA has to be determined. ...read more.

x 0.1 = 2.59x10-3 mol Therefore, the mole ration of EDTA to Ni2+ ~ 1:1 The formula of the Nickel-EDTA complex is then [Ni(EDTA)] (e) Discussion: Questions 1. Zn reduced part of VO2+ (yellow) into VO2+ (blue), the mixing of the two species give a resulting green solution. 2. Yellow--> yellowish green --> bluish green --> blue --> dark blue --> bluish green --> dark green --> grey --> violet. It is because Zn reduce VO2+ gradually to VO2+, and then V3+ and finally V2+ 3. The pale yellow colour of the solution gradually turns orange --> brown, after the addition of thiosulphate, it turns yellowish green, bluish green and finally pale blue. It is because before the addition of thiosulphate, VO2+ was reduce to VO2+ while at the same time the iodide ions added was oxidized to iodine solid, thus showing a brown colour. After thiosulphate solution was added, it reduced the iodine back into iodide and hence the real colour of VO2+ (blue) ...read more.