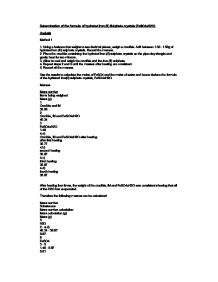 Determination of the formula of hydrated Iron (II) Sulphate crystals (FeSO4xH2O) Analysis Method 1 1. Using a balance that weighs to two decimal places, weigh a crucible. Add between 1.30 - 1.50g of hydrated iron (II) sulphate crystals. Record the masses. 2. Place the crucible containing the hydrated iron (II) sulphate crystals on the pipe-clay triangle and gently heat for two minutes. 3. Allow to cool and weigh the crucible and the iron (II) sulphate. 4. Repeat steps 2 and 3 until the masses after heating are consistant. 5. Record all the masses. Use the results to calculate the moles of FeSO4 and the moles of water and hence deduce the formula of the hydrated iron(II) sulphate crystals, FeSO4xH2O. Masses Mass number Items being weighed Mass (g) 1 Crucible and lid 38.86 2 Crucible, lid and FeSO4xH2O 40.34 3 FeSO4xH2O 1.48 4.a) Crucible, lid and FeSO4xH2O after heating after first heating 39.77 4.b) second heating 39.67 4.c) third heating 39.67 4.d) fourth heating 39.67 After heating four times, the weight of the crucible, lid and FeSO4xH2O was consistant showing that all of the H2O has evaporated. ...read more.

The result for titration 4 was then concordant with the other results. I think that this result was anomalous as it went against the trend in the measurements. The anomaly was probably caused by a measurement error. The main measurement error for this method was the burette. This was accurate to 0.05 cm3 Burette percentage error = 0.5 x 100 = 2.3% 21.70cm3 This is a smaller percentage than for the balance in method 1 but only because the amount of the substance used was larger. This percentage can be reduced by increasing this amount. For example: percentage error = 0.5 x 100 = 0.23% 217.0cm3 The main procedural error for this method is the inaccuracy that could occur when using the pipette filler. It is very easy to make an inaccurate measurement when using the pipette filler as it is hard to keep the meniscus of the liquid at the 25cm3 point on the pipette so therefore quite easy to inadvertently use too much or too little of the liquid. I think that overall method one was more accurate even though the percentage error of the balance was more than that of the burette as there are easily made procedural errors in method two and as there were no anomalous results in method 1. ...read more.