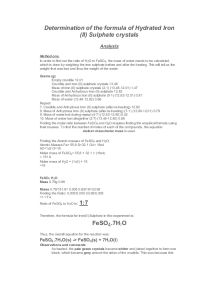 Determination of the formula of Hydrated Iron (II) Sulphate crystals

This makes the method very unreliable as there are no other results to compare to, to ensure that the mass of water calculated is not simply an anomaly. Moreover, finding the average between a number of results increases the accuracy of the overall result but you can not do this with method one. Additionally, as the procedure was not repeated until the iron sulphate reached a constant mass, it is quite likely that not all of the water was driven off; making the weight of water calculated not entirely accurate. Conversely, in method two, 4 titrations were completed and an average was found from 3. Not only does this method allow you to identify an anomaly but it allows you to find an average between a number of titres, which means you are more likely to get closer to the actual answer. There is the procedural uncertainty with method two surrounding the loss of Fe2+ ions due to transferring them but since the mixing container and weighing boat were rinsed with de-ionised water, the loss of ions should have been at a minimum. However, as the procedure in method one stands, there are a number of procedural uncertainties including the deepness of the crucible and the iron (II)sulphate crystals as well as not knowing how intense the heat should be. All of these issues can lead to the uneven heating of the iron (II) sulphate and ultimately, the part decomposition of the iron (II) sulphate. This means that when weighing what should be only anhydrous iron (II) sulphate, you are not. If this problem can arise when I was conduction the experiment, this means it could arise again suggesting that the method has some significant flaws. Therefore, comparing the two methods; I believe that method two is the most accurate. This is for the reasons stated above and although method two only repeats the titration three times; method one only obtains one mass of water. Moreover, the procedural uncertainties concerning method one are likely to have a more significant affect on the accuracy of the results than the procedural uncertainty of method two. ...read more.