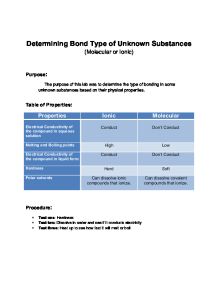 Determining Bond Type of Unknown Substances (Molecular or Ionic) Purpose: The purpose of this lab was to determine the type of bonding in some unknown substances based on their physical properties. Table of Properties: Properties Ionic Molecular Electrical Conductivity of the compound in aqueous solution Conduct Don't Conduct Melting and Boiling points High Low Electrical Conductivity of the compound in liquid form Conduct Don't Conduct Hardness Hard Soft Polar solvents Can dissolve ionic compounds that ionize. Can dissolve covalent compounds that ionize. Procedure: * Test one: Hardness * Test two: Dissolve in water and see if it conducts electricity * Test three: Heat up to see how fast it will melt or boil 1) Carefully read the directions first 2) ...read more.

On top of that, it is very soft because covalent compounds are frequently flexible rather than hard. It is also promising that B is molecular. It did not conduct electricity, melted and boiled at a low boiling point, and was soft when felt. Although it did not dissolve with oil, all other collected data suggests that it is, most likely, a molecular bond. It is determined that substance C is ionic because it did not melt/boil or change physical appearance. It conducted electricity but did not dissolve. Despite the fact it is soft; the is harder than molecular substances. D is ionic because it's hard, conducted electricity in solution state, did not melt or boil but rather condensed and clumped and it did not dissolve in oil. To improve the lab, the team could perform more tests to make it much easier to determine the bond type. ?? ?? ?? ?? ...read more.