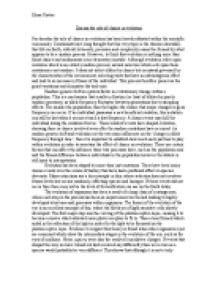 Discuss the role of chance in evolution

﻿Elena Coates Discuss the role of chance in evolution For decades the role of chance in evolution has been heavily debated within the scientific community. Creationists have long thought that this very topic is the theories downfall; that life on Earth, with all its beauty, precision and complexity cannot be formed by what appears to be a random process. However, to think that evolution is nothing more than blind chance and randomness is an elementary mistake. Although evolution relies upon mutation which is an entirely random process, natural selection which acts upon these mutations is not random. It does not select alleles by chance but is instead governed by the characteristics of the environment, selecting traits that have an advantageous effect and lead to an increase in fitness of the individual. This process therefore preserves the good variations and eliminates the bad ones. Random genetic drift is a potent factor in evolutionary change within a population. This is a mechanism that results in fixation (or loss) of alleles by purely random processes, as allele frequency fluctuates between generations due to sampling effects. ...read more.

If these events did not occur then there may not be the level of diversification we see on the Earth today. The evolution of organisms has been a result of a long chain of contingences, where each step in the process has been an improvement on the last leading to highly developed structures and processes within organisms. The theory of the evolution of the eye is an excellent example of this, where the flat layer of light-sensitive cells slowly developed. The first major step was the curving of the photoreceptive layer, causing it to become concave which allowed more photo receptors to fit in. Then a lens formed which aided in the refraction of the light in order for the light to be focussed on the photoreceptive layer. Evidence to support this theory is found when other organisms eyes are examined which show the intermediate stages in the evolution of the eye, such as the eyes of molluscs. Homo sapiens were also the result of cumulative changes. If events that shaped the way we have turned out had occurred any differently then we in turn as a species would probably be very different. ...read more.

The idea that populations of organisms contain the necessary variations in order for natural selection to be the only force required for evolution has been challenged, increasing the role of chance within evolution. Jacques Monod voiced that ?chance alone is at the source of every innovation, of all creation in the biosphere. Pure chance, absolutely free but blind?? It is hard to find evidence to support this theory, as natural selection must still play a huge role in determining how genes are past on and therefore how organisms develop. The process of evolution is driven by the engine of natural selection, a filter that extracts order out of chaos according to a fixed and non-random set of rules. If there were no selection, change in living things would follow a pattern called a "random walk". There would be no permanent change in gene frequency across generations. In conclusion, evolution does contain a component of chance, but there is far more to the process than that, and it is precisely the existence of the non-chance components that allows evolution to work. Evolution will not proceed in just any direction, but only in those that make them better adapted to their surroundings. ...read more.