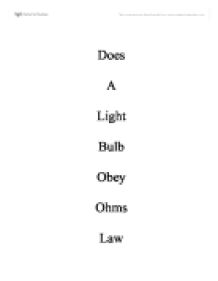 My aim is to carry out an investigation to find out whether a filament light bulb obeys ohms law. I am carrying out an experiment to find the different resistances and currents created by a light bulb at different voltages. Because of the light bulb, it glows white-hot when fully on, the resistance will change at different voltages. When the voltage is low and the bulb is not very bright, it won't be as hot and therefore it will have less resistance. But when the current is high and the bulb is brighter, it will have a high resistance.

Ohms law suggests that if you were to increase the P.D (potential difference) across a resistor then the current flowing through a resistor will increase. This means that the current would evenly go up as the P.D increases.

This is a device that measures the current of electrons in Amps. It has to be placed in series on the circuit.

This is the circuit I will be using to perform my experiment:

To ensure my experiment is a fair test I will use all of the same equipment for the whole experiment. This is because each piece of equipment has their own faults in them. If I use a consistent set of equipment then I will have a more consistent group of results. I will measure each voltage three times so I can get a wider variety of results. Because we are working in a classroom there are some problems which may affect our results inaccurate equipment, old equipment, room temperature and lack of space to work with.

To improve the experiment, I would probably have to be really professional and a lot more scientifically precise in how I carry out the experiment. I would need to make sure there is a consistent classroom temperature, as changing temperatures may affect the filament's own temperature. If I had more time, I could try the investigation with different equipment to what I had already used. This could prove that the equipment I used doesn't matter in the experiment, and it's the fact that how I carry it out which is key.

To extend the project further, we could carry on the voltages to twenty, or twenty-five to see what happens to the results and graphs then. We even could carry the experiment on until the filament melts, and see how much voltage it can take. Also, we could add a lamp or two into the circuit and see if this affects the resistance in any way. Maybe instead of a power pack, replacing it with a couple of cells and also adding a variable resistor into the circuit.