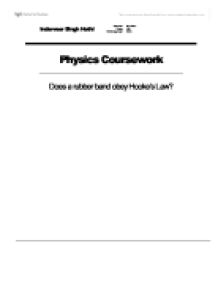 was the first person to realize that the extension of a

spring keeps in step with the force on it. So this

result is now called Hooke's law. A simple way of

describing this is by means of a graph. When the

extension is directly proportional to the force, the

graph is a straight line through the origin: 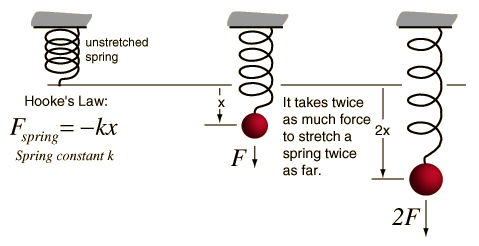 The point at which a material ceases to obey Hooke's Law is known as its elastic limit. The first part is very easy. It means that the bigger the weight (stress) you hang on the string the more it will stretch (strain). The second part is also easy. Whilst the elastic limit is not exceeded, the string will go back to its original length when you take the weights off it, but if you add too

Next set-up your apparatus as shown below.

Now start with your rubber band.

First record the measurement at the hanger.

Now do steps 5-6 again each time adding on 1 extra Newton until your total gets to 10N.

I could have compared a spring with a rubber band and talk about there differences and similarities.

After looking at my computerised and hand drawn graph I found that there were not any results that did not fall on my best fit curve, the reasons for this may have been that I was very accurate in my readings and that they were very precise.

If I did this experiment again I would make the following changes:

I could have improved my results and readings if I had done the following more carefully:

I can also do this investigation in a number of different ways: