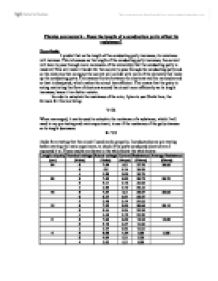 Does the length of a conduction putty affect its resistance?

Physics coursework - Does the length of a conduction putty affect its resistance?

In order to calculate the resistance of the wire, I plan to use Ohm's Law, the formula for this law being:

These results prove that the putty that I am investigating is an Ohmic conductor, as even when the potential difference changes, the resistance of the putty remains constant for the same length.

Now that I have proved that the putty does conduct electricity in a constant manner, I can start the main experiment.

Finally, before I eat anything, I will make sure that my hands are thoroughly washed with soap and water, in order to get rid of any traces of putty that may have come into contact with my hands during the experiment, as they could be toxic. I will follow this safety precaution even though I am wearing gloves, as small tears could occur in the gloves during the course of the experiment.