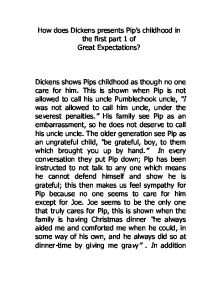 How does Dickens presents Pip's childhood in the first part 1 of Great Expectations? Dickens shows Pips childhood as though no one care for him. This is shown when Pip is not allowed to call his uncle Pumblechook uncle, "I was not allowed to call him uncle, under the severest penalties." His family see Pip as an embarrassment, so he does not deserve to call his uncle uncle. The older generation see Pip as an ungrateful child, "be grateful, boy, to them which brought you up by hand." In every conversation they put Pip down; Pip has been instructed to not talk to any one which means he cannot defend himself and show he is grateful; this then makes us feel sympathy for Pip because no one seems to care for him except for Joe. Joe seems to be the only one that truly cares for Pip, this is shown when the family is having Christmas dinner "he always aided me and comforted me when he could, in some way of his own, and he always did so at dinner-time by giving me gravy" . ...read more.

Although she does all this Pip still has respect for her as he calls her 'miss' even though they are the same age this shows he is an obedient child . As well as this Estella makes fun of Pips 'course hands' and calling 'knaves, jacks'. After Estella says all this to Pip he starts to be ashamed of himself, he cares about what she has to say about him, she dislikes him so much that Pip starts to dislike himself for being so common. He begins to blame Joe and Mrs Joe for being the way he is, and he starts to become ashamed. Pip has always looked up to Joe, as he felt like Joe was his equal and was the only one that truly cared for him. When Pip visits the Satis house he looks at his lifestyle differently as he feels more like a commoner and he is ashamed of his life style "I had believed that the forge was the glowing road to manhood and independence". Pip had always wanted to be a blacksmith and believed that when he became a blacksmith he would become a man. ...read more.

I believe Dickens lifestyle influenced his writing because it mirrors his childhood. Pip lived near the marshes so did Dickens. Both Pip and Dickens travelled to London where their lives changed for the better. Great expectation reflects the difference in society, Pip discovers that the world is seen in classes as well as this when Dickens went to London he realised the same thing. Dickens describes his childhood as dark, shameful, miserable, and poor and on his own. When Pip is looking at his younger self he realises that the he had an awful childhood and his sister was very mean to him. In addition Pip was a very lonely child like Dickens, he never had any friends and he never talked of any children. When Pip was a child his father was not around as he was dead, this relates to Dickens because his father went to prison for debt. I believe the reason that Pip's father is dead is because Dickens felt like his father was dead as he was never there. ...read more.