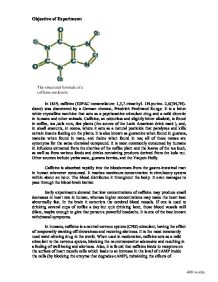 Objective of Experiment: In 1819, caffeine (IUPAC nomenclature: 1,3,7-trimethyl- 1H-purine- 2,6(3H,7H)-dione) was discovered by a German chemist, Friedrich Ferdinand Runge. It is a bitter white crystalline xanthine that acts as a psychoactive stimulant drug and a mild diuretic in humans and other animals. Caffeine, an odourless and slightly bitter alkaloid, is found in coffee, tea ,kola nuts, ilex plants (the source of the Latin American drink mat� ), and, in small amounts, in cocoa, where it acts as a natural pesticide that paralyzes and kills certain insects feeding on the plants. It is also known as guaranine when found in guarana, mateine when found in mate, and theine when found in tea; all of these names are synonyms for the same chemical compound. It is most commonly consumed by humans in infusions extracted from the cherries of the coffee plant and the leaves of the tea bush, as well as from various foods and drinks containing products derived from the kola nut. Other sources include yerba mate, guarana berries, and the Yaupon Holly. Caffeine is absorbed rapidly into the bloodstream from the gastro-intestinal tract in human whenever consumed. It reaches maximum concentration in circulatory system within about an hour. The blood distributes it throughout the body. It even manages to pass through the blood-brain barrier. Early experiments showed that low concentrations of caffeine may produce small decreases in heart rate in human, whereas higher concentrations may make the heart beat abnormally fast. In the brain it constricts the cerebral blood vessels. If one is used to drinking several cups of coffee a day but quit drinking later, those blood vessels will dilate, maybe enough to give that person a powerful headache. It is one of the best known withdrawal symptoms. In humans, caffeine is a central nervous system (CNS) stimulant, having the effect of temporarily warding off drowsiness and restoring alertness. It is the most commonly used mind-altering drug in the world. ...read more.

4. When carrying the compound microscope, always use two hands, holding it by the limb and under the "feet" (base); put it down the bench workstation without jarring. (Never carry microscope by the microscope tube or stage) 5. Keep the lenses and working surface (the stage) clean and dry, uncontaminated by reagents, stains and fixatives. Take special care to avoid contact between the lenses and the fingers of the experimenter (and later, with any of the solvents, stains and mounting fluids in use). 6. Lenses and the mirror should be wiped only with lens tissue. 7. Do not use direct sunlight to illuminate the mirror or condenser lens of the microscope, since sunlight when focused on to the retina may damage the light-sensitive cells there. 8. Take care when using electrical equipment like microscope light near to water. 9. Take care when clipping the cavity slide to the stage of the microscope to prevent breakage. 10. If a stroboscope is used to show the Daphnia's heart rate and the experimenter knows he/she suffer from photosensitive epilepsy, the lecturer should be informed of this and appropriate precautions be taken. 11. The caffeine solution is ensured not too concentrated so that the Daphnia does not die of it. 12. Each experiment of different concentration of caffeine solution ought to be conducted as fast as possible for there is a risk for the Daphnia to die in a new environment. 13. The Daphnia should be place back into the petri dish which contains pond water after each experiment of different concentration of caffeine solution so that it restores to its normal heart rate before it being used for another experiment. 14. The Daphnia used should be handled with care to avoid it from injury and thus affect the results of the experiment. 15. Glassware like beaker and cavity slide must be handled carefully to avoid breakage. The steps mentioned above are the precautionary steps to be taken. ...read more.

On the minus side, experimenters have to be extremely cautious when dealing with them because they are delicate and vulnerable. In addition, Daphnia is small and delicate as well as belongs to a different family and phylum from human. It ought not to be assumed that 0.5% caffeine concentration will induce the same trend of change in human heart rate. On top of that, researches show that upon consuming a modest amount of caffeine, human heart rate could be decreased slightly. What is more, Daphnia have neurogenic hearts, while human have myogenic hearts. Thus, in drawing parallel the results of this experiment to human, the information mentioned above should be considered. 12. It should be understood that any experiment involving living organism always rises up bioethical issues. While performing experiment involving living organism can bring greater advances in science, it should not be forgotten that the well-being of the living organisms involved in the experiment should be taken care of, so that they do not suffer for the experiment or at least their sufferings are minimized. Therefore, the Daphnia being used in the experiment ought to be treated with great care to avoid hurting or even killing them. If possible, the Daphnia should be returned back to their natural habitat after the experiment so that they can return to their normal lives. This step also avoids any disruption in the food chain which may affect the ecosystem. 13. Besides concentration of caffeine solution, factors like surrounding temperature, amount of alcohol and amount of some drugs such as aspirin can affect the heart rate of Daphnia. If possible, all these factors can be tested to study how they affect the heart rate of Daphnia. Daphnia are very sensitive to poor water conditions too. Further studies can be done by testing how the different pollutants in the water affects the heart rate of Daphnia. Conclusion: Generally, when the concentration of caffeine solution increases, the heart rate of Daphnia increases. Prolong exposure of Daphnia to caffeine can result in the building up of tolerance of Daphnia towards caffeine. ...read more.

The writer has designed a logical experiment to determine the effect of caffeine on the heart rate of Daphnia, collected adequate results to establish a justified conclusion and evaluated the data collected and experimental procedures as well. The writer has ...

The writer has designed a logical experiment to determine the effect of caffeine on the heart rate of Daphnia, collected adequate results to establish a justified conclusion and evaluated the data collected and experimental procedures as well. The writer has provided a very elaborate introduction to provide background knowledge on relevant details, but there are many unnecessary details as well. The introduction can definitely be more succinct and comprehensive. The report clearly states the aim of the report, the hypothesis with a Ã¢â‚¬Å“cause and effectÃ¢â‚¬Â statement, the variables of the experiment and the procedures of the experiment. The data collected is presented in tabular and graphical form in neat and elegant manner. More consistency on the significant figures and decimal places could have been achieved though. The precautionary steps taken are very detailed. The discussion of the report highlights the trends observed and the writer attempts to explain the data using the biology explained in the introduction. The evaluation section provides realistic ways to modify the experiment to improve it, and these modifications can actually enhance the experiment by a large margin, so the report definitely answers the question overall. Overall, the report is very detailed in approach.

The depth of the report is brought out well in the procedure, discussion and evaluation. The procedures are very detailed in describing each step, especially in handling the daphnia. The evaluation and discussion section are very meticulous in describing the results collected and each observation is explained using background biological information. The evaluation section is excellent in that it lists of shortcoming of a specific procedure, explains how this might affect data, recommends other ways to improve and justifies how this might not affect data negatively. While the writer lists many ways of improvement, the writer also manages to score on the quality of these improvements. Overall, the writerÃ¢â‚¬â„¢s analysis of the data and the sophistication in writing is excellent.

The quality of writing in terms of grammar, spelling and vocabulary is adequate. At times, some terms could be better handled such as the use of Ã¢â‚¬Å“independent variableÃ¢â‚¬Â instead of Ã¢â‚¬Å“manipulated variableÃ¢â‚¬Â. Overall, the use of biological terms however is well-handled. The organization of the report is very good and this is an added advantage to this report.