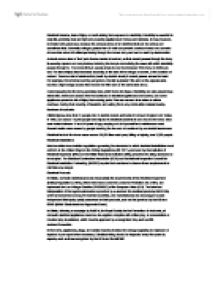 Electrical Hazards, risks of injury or death arising from exposure to electricity. Electricity is essential to daily life, providing heat and light and powering appliances in homes and factories. It must, however, be treated with great care, because the consequences of an electrical fault can be serious and sometimes fatal. Generally voltages greater than 50 volts can present a serious hazard and currents of more than about 50 milliamps flowing through the human body can lead to death by electrocution. A shock occurs when a "live" part of some device is touched, so that current passes through the body. Its severity depends on many factors, including the body's conductivity (the ease with which electricity passes through it). The conductivity is usually small, but can be increased if the body or clothing is wet. ...read more.

Most were males between 15 and 64 years of age, carrying out do-it-yourself and maintenance work. Several deaths were caused by people touching the live end of a cable cut by an electric lawnmower. Electrical faults in the home cause around 25,000 fires each year, killing or injuring over 2,000 people. Electrical Installations Most countries have detailed regulations governing the standards to which electrical installations must conform. In the United Kingdom the Wiring Regulations (BS 7671), produced by the Institution of Electrical Engineers (IEE) and the British Standards Institution (BSI), prescribe the wiring standards to be adopted. The Electrical Contractors Association (ECA) and the National Inspection Council for Electrical Installation Contracting (NICEIC) require their members to observe these requirements to minimize any danger. Electrical Products In Britain, domestic electrical products must satisfy the requirements of the Electrical Equipment (Safety) ...read more.

Electrical wiring should be inspected every five years by experts, such as those recognized by the ECA and the NICEIC. Children must be warned to keep away from railways, electricity sub-stations, and factories, and fishing-rods, especially those made of carbon fibre, and kites must not be used near overhead power lines. Anyone using electrical equipment out of doors should ensure that the supply is protected by an RCD (residual current device), which detects any current to earth and so will protect the user against the danger of serious electric shock by disconnecting the supply in the event of a fault occurring. In the home, fuses, which are a rather crude method of protecting the distribution system against excessive current, have largely been replaced by the more precise MCB (miniature circuit-breaker), and RCDs are now usually incorporated to provide added safety from the danger of electric shock. ...read more.

The candidate clearly uses appropriate technical terms and always defines a new term, which shows a good understanding of electricity and electrical faults and makes the essay easier to read. The information provided shows a good level of detail and the candidate seems to have undergone independent research as they have included statistical figures relating to electrical accidents and they have clearly stated the regulations involved in electrical insulation. This is a nice touch, its helps illustrate their points and shows dedication and interest in the subject. However if you plan to this it is essential to write a short bibliography stating the sources you have used. Furthermore the essay comes to an abrupt end, without a conclusion. A good conclusion is important, it helps draw the essay to a close, it also allows you to summarise all of your key points and include personal opinions so that you can leave the reader with a good impression.

The layout of this piece of writing is slightly unclear, there are no spaces between paragraphs and headings which is a little bit confusing. You should make your that you work is laid out in clear and coherent manner. That said, the candidate uses technical terms correctly, there are no spelling issues and appropriate grammar is used throughout.