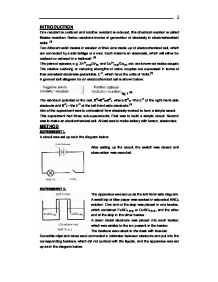 INTRODUCTION One reactant is oxidized and another reactant is reduced, this chemical reaction is called Redox reaction. Redox reactions involve in generation of electricity in electrochemical cells. [1] Two different solid metals in solution of their ions made up of electrochemical cell, which are connected by a salt bridge or a wire. Each metal is an electrode, which will either be oxidized or reduced in a half-cell. [2] The pairs of species, e.g. Zn2+(a.q)/Zn(s) and Cu2+(a.q)/Cu(s), etc. are known as redox couple. The relative oxidizing or reducing strengths of redox couples are expressed in terms of their standard electrode potentials, EO, which have the units of Volts.[3] A general cell diagram for an electrochemical cell is shown below: fig 1 [2] The standard potential of the cell, EO=EOR-EOL where EOR =the EO of the right-hand-side electrode and EOL= the EO of the left-hand-side electrode.[4] Aim of the experiment was to understand how electricity worked to form a simple circuit. This experiment had three sub-experiments. First was to build a simple circuit. Second was to make an electrochemical cell. ...read more.