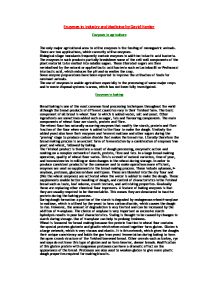 Enzymes in Industry and Medicine by David Harder Enzymes in agriculture The only major agricultural area to utilise enzymes is the feeding of monogastric animals. There are two applications, which currently utilise enzymes. Biological silage inoculants frequently contain enzymes in addition to lactic acid bacteria. The enzymes in such products partially breakdown some of the cell wall components of the plant material to be ensiled into soluble sugars. These liberated sugars are then metabolised by the natural or applied lactic acid bacteria such as Lactobacilli or Pediococci into lactic acid, which reduces the pH and so ensiles the crop. Some enzyme preparations have been reported to improve the utilisation of feeds for ruminant animals. The use of enzymes in arable agriculture especially in the processing of some major crops and in waste disposal systems is areas, which has not been fully investigated. Enzymes in baking Bread baking is one of the most common food processing techniques throughout the world although the bread products of different countries vary in their finished form. The basic component of all bread is wheat flour to which is added water, salt and yeast. Other ingredients are sometimes added such as sugar, fats and flavouring components. The main components of wheat flour are starch, protein and fibre. The wheat flour has naturally occurring enzymes that modify the starch, protein and fibre fraction of the flour when water is added to the flour to make the dough. ...read more.

The addition of xylanases and other fibre-degrading enzymes have been shown to have a dramatic effect on the dough and finished bread characteristics. Recently lipases have become available for use in bread making. Certain types of lipids have an influence on staling and the organoleptic properties of bread. Some of the lipases already commercialised for other purposes are being used in bread making. It is expected that a new generation of lipases specific to bread making will be available soon. The interactions between enzymes on the various components of bread dough is a very complex subject and the wrong enzyme cocktail or even the wrong application rate can result in detrimental effects on either the dough or the finished bread. For example too much enzyme usually results in a loss of structure, resulting in bread that does not rise properly or that will cause problems in bakery machinery because it is too sticky. Detergents Enzymes have been used in the detergent industry since the mid 1960's and are probably the best-known application of industrial enzymes especially in laundry products - the so-called "biological" washing powders, liquids and tablets. The main enzyme activity in biological laundry detergents is protease, which acts on organic, stains such as grass, blood, egg and human sweat. However, it has become more common in recent years to include a "cocktail" of enzyme activities including lipases and amylases. ...read more.

is called tissue plasminogen activator. Nuclease is considered as a possible therapy for cystic fibrosis, but it is not clear how commercialised and therapeutically successful this has been. * Proteases are also used in wound therapy. In this case they are called debriding agents and are used to clean a wound and therefore accelerate the healing process. * Some proteases are also used as anti-inflammatory reagents. An enzyme called superoxide dismutase is also available as an anti-inflammatory agent, but how successful it has been as a commercial product, is not clear. * Drug manufacture: The chemical synthesis of complex drugs is often difficult and companies frequently turn to enzymes to perform chemical conversions. In fact the company Chiroscience was set up to investigate the use of enzymes in pharmaceutical manufacture. * In a semi-therapeutic way, enzymes are also used to aid digestion, both in humans and animals. In humans, enzymes are used to supplement the natural amylase, lipase and protease produced normally by the pancreas. Many ethnic groups also have a problem called lactose intolerance. This means, as these people get older they lose the enzyme lactase (converts lactose into glucose and galactose). This means they cannot ingest milk or dairy products. Lactase supplements help to avoid stomach upsets for these people. Some of my information has come from: * www.enzymes.co.uk * "A New Introduction to Biology" by Bill Indge, Martin Rowland and Margaret Baker * www.worthington-biochem.com * www.biochem.ucl.ac.uk * "AS Biology Revision" by Letts ...read more.

**** An essay that contains a good deal of researched information which perhaps could have been presented in a more concise and logical style.
To improve
Scientific content
The essay does contain a good deal of information that would indicate the writer has researched material that is beyond the A level specification. The essay does give the impression that some of this material has been used directly from the sources without modification. A level examiners are looking for material that could be expected from knowledge of the syllabus as well as a greater depth of study, so it is important some of these are included as examples.
Breadth
The breadth is reasonably sound but the industrial section does focus on one or two uses in great detail. It would be better to include a greater number of examples rather than spend a whole paragraph on just one example.
Relevance
The material is generally selected in support of the title but some of the main content of the essay is only of marginal importance and could be omitted.
Written communication
The account is generally presented in clear scientific English and technical terminology has been used effectively and is usually accurate. It might have been better to have given the essay a logical structure , perhaps by listing the applications in a historical time line rather than isolated paragraphs on each use.