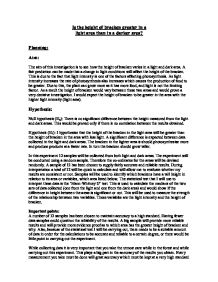 Is the height of bracken greater in a light area than in a darker area? Planning: Aim: The aim of this investigation is to see how the height of bracken varies in a light and dark area. A fair prediction can be made that a change in light conditions will affect the height of the bracken. This is due to the fact that light intensity is one of the factors affecting photosynthesis. As light intensity increases the rate of photosynthesis also increases which causes the production of food to be greater. Due to this, the plant can grow more as it has more food, and light is not the limiting factor. As a result the height of bracken would vary between these two areas and would prove a very decisive investigation. I would expect the height of bracken to be greater in the area with the higher light intensity (light area). Hypothesis: Null hypothesis (H0): There is no significant difference between the height measured from the light and dark areas. This would be proved only if there is no correlation between the results obtained. Hypothesis (H1): I hypothesise that the height of the bracken in the light area will be greater than the height of bracken in the area with less light. A significant difference is expected between data collected in the light and dark areas. The bracken in the lighter area is should photosynthesise more and produce products at a faster rate. In turn the bracken should grow taller. In this experiment 12 samples will be collected from both light and dark areas. The experiment will be conducted using a random sample. Therefore the co-ordinates for the areas will be devised randomly. A sample of 12 has been chosen to supply fairly accurate and reliable results. During interpretation a total of 12 will be quick to calculate and will allow me to evaluate whether my results are consistent or not. ...read more.

Then you should weigh the 5 Petri dishes needed for the 'dark area', and record their weight. Next you need to take the 5 soil samples from the 'dark area' and place them in the labelled Petri dishes. Now you must weigh the soil samples separately and record their weight. Then put the Petri dishes in the microwave for 15 minutes. When that's done, take them out, re-weigh the samples and record the results with the corresponding coordinates. Note: when placing these in the microwave, you need to place a small beaker of water towards the back of the microwave, so that the microwave doesn't blow up. This could happen due to the microwave over-heating. You also need to make sure that there is nothing else in the microwave except the samples and the beaker of water. If there is something else, that could cause a spark, which can be very dangerous and also be fatal. Your results of your moisture test would also become void and ruin your whole experiment. The soil left behind should be returned to the forest. Once this experiment is done, you should have the weight of the soil before it was put into the microwave and the weight after it came out of the microwave. With these you can then work out the percentage moisture of the soils sample at that particular coordinate in that area. I have shown you how to calculate this in the analysing section. Important points: At first I was only going to take the 3 tallest leaves or branches of bracken, but to improve the accuracy and reliability of my results, I changed this to 4. As having the mean of 4 tallest leaves would be more accurate and reliable than having the mean of 3 heights. As there is someone else helping to read off the coordinates and hold the quadrat over the coordinate in which the height of bracken is being measured, the person carrying out the experiment is not alone. ...read more.

If there was more time available to me, I would have selected other sites to carry out this experiment, and not just used one dark area and one light area. This would have given me more results and would have allowed me to make more precise conclusions. I think that my results are quite reliable and give a clear pattern which matches my results despite having some minor errors. If I was to carry out further work on this topic, I would definitely take more light intensity readings, although it would be difficult to take readings the same time as measuring the height of bracken and at every coordinate, as the time gap would be too great, giving an opportunity for the weather conditions to change. There could have been a major factor in the competition for light, especially in the dark area. Due to there being less light available to the plants, there would be more competition between other species of plant (such as thorn bushes and small weeds) to gain as much light as possible in order to photosynthesise and produce the required amount of nutrients needed by the plant. To further my investigation, I would perhaps take note of the other species of plant present in the quadrat when measuring the height of bracken. If I was to go into much more detail, I would try and work out the percentage cover of bracken and the other plants present. However, this may be difficult as the bracken leaves probably tower over the smaller plants and so gain most of the light, which would mean little competition for light by the other plant. Nevertheless, there are many nutrients to be obtained from the soil. Also, all plants need water, which would provide even more need for competition, especially if there are other plants species than just bracken, which in most cases is unlikely, but still possible. Another area of possible further study would be to see whether the level of water has a negative effect on the growth or height of bracken in the dark area. ...read more.

Overall, this is a very substantial report of an investigation into a possible relationship between bracken height and light intensity. The writer explains clearly and in considerable detail how bracken plants were measured in two different sampling locations together with the light intensity in those locations. A number of other abiotic factors were measured at the two locations and taken into account when analysing the data. The investigation would have benefited from more data points against which to judge the hypothesis. As such, the writer provides us with only two results in effect - dark and light. It is not possible to see a trend with so little data. Scattergraphs are extremely useful in investigating relationships between two factors in ecology. At each sampling point, bracken height can be measured and light intensity measured. With 50 such locations, and 50 points on a scattergraph, the relationship between light intensity and bracken height would have been a lot clearer. Nonetheless, a considerable effort with most sections covered in more than adequate detail.