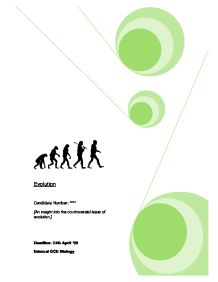 Evolution. This issue report will aim to address the Theory of Evolution by explaining key concepts and ideas in an informative and unbiased way. It will set forth to describe the theory, by highlighting its main components,

Evolution Candidate Number: **** [An insight into the controversial issue of evolution.] Deadline: 24th April '09 Edexcel GCE Biology Introduction This issue report will aim to address the Theory of Evolution by explaining key concepts and ideas in an informative and unbiased way. It will set forth to describe the theory, by highlighting its main components, and also touching upon significant moments in time that shaped the modern Theory. I will be identifying the problem/s biologists have in regard to this issue, and the measures they are taking to produce an effective solution. Problem The problem biologists are struggling to solve is the full establishment of the Theory of Evolution as an accepted fact throughout the global population. And that is why the scientific community is determined to enlighten everyone with their own understanding. On a near global scale, the Theory of Evolution has become a default ideology that defines the existence of life. It is defined as scientific and logical, and it has become extremely dominant due to the many biologists who agree with it because of its simplicity, in terms of understanding the basic concept. It is taught as a standard in educational facilities, and therefore cannot be disputed. The problem with this issue is that while calling it a 'Theory', the majority of proponents consider it as solid fact. ...read more.

and micropalaeontology: "Study of generally microscopic fossils, regardless of the group to which they belong." [(8)] Why do scientists use palaeontology? They use it because it helps draw links between early and later generations of species. It's actually a fundamental process that made Figure 1 and 2 true. (See Pg 3 and 4) Scientist Georges Cuvier (1769-1832) attempted to explain fossils. "He was able to show, sometimes from the merest fragments of bones, the relationships between living organisms and a fossil of an extinct form of life - part of the basis of modern palaeontology." [(9)] This is evident that palaeontology is a vital branch in science. This is also a fairly reliable process because palaeontology analyses fossils which are reliable due to the fact that they don't change in morphology (physical/phenotypical feature) and are preserved imprint of the fossilised species. If you clearly look at Figure 3, you can see that it closely resembles the modern day angler fish, and even though this fossil was estimated to have been alive some 150 million years ago, there are similar morphological similarities such as visible fish scales, bones and dorsal fin. * Molecular phylogenetics is described as the "analysis of structures of many different chemicals and genes to identify the inter-relationships between groups of organisms." ...read more.

[(15)] Anatomical adaptations can include emphasised features such as cactus spines. They enable it to defend itself against predators that may be in search of water in the desert. Its small surface area doesn't allow a lot of water to escape the plant. This shows that the plant has a design that it is well suited to its environment. Physiological adaptations refer to the biochemical pathways; the mechanism explaining why the body works in a particular way. For example, "diving mammals can stay under water for far longer than non-diving mammals without drowning." [(15)] Behavioural adaptations refer to attitudes and reactions to the environment. For example, wolves travel in packs to effectively make their hunting more efficient. The wolves co-ordinate their attacks, so that they can take down larger prey - something a lone wolf could never achieve. This can be argued that a design such as this can only be accomplished through successful and beneficial evolutionary traits being passed on from earlier ancestors. This is a key idea in natural selection, where survival of the fittest states that for a successful species to emerge, there must be beneficial genes passed on from earlier ascendants. Coming full circle, we can see that evolution can be explored in many ways. What scientists need to do is to further their research so that they in the future, perhaps, a unified theory may prevail. ...read more.

This is a well researched and written report .
1. It is well introduced and uses appropriate methods to indicate the information sources.
2. The use of images is excellent.
3. The report is missing a complete conclusion.
4. Be careful with some statements and claims as they show bias.
5. Do not just use websites to research for report, use textbooks or, ideally, scientific papers.
****