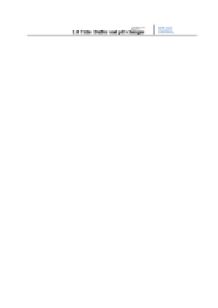 Experiment to demonstrate the effects of buffers on ph changes.

﻿1.0 Title: Buffer and pH changes ________________ 2.0 Abstract: In the beginning, processes are affected by the hydrogen ion concentration and the control of pH is important in organisms and their cells because chemical reactions like for an example, the ambient pH affects the enzyme function. However, some side chains of amino acids (R-groups) have ionizable groups like carboxyl or amine groups but changes in pH can alter the number of positively and negatively charged groups. Furthermore, the net charge on the protein effects its three-dimensional structure and thus causing it to have an enzymatic activity. Also, when working with living systems in a laboratory it is necessary to pay close attention to the pH of solutions for that same reasons. Moreover, chemicals that tend to prevent changes in the concentration of hydrogen ions are buffers which are chemicals or combinations. In the lab, we will learn about some buffered solutions to gain a further understanding of how buffers work and to observe the range of buffering capacity. When analysing the data, will make use of graphs and see the relationship of pH to pKa using the Henderson-Hasselbalch equation. In general, buffers are composed of mixtures of weak acids and their corresponding salts and by using the Lowry Bronstead definition, an acid is a compound that can donate a hydrogen ion. However, a weak acid is one that does not completely dissociate or ionize, in a solution. ...read more.

The Determination of Buffering Action toward Base Beaker Num. Solution Initial pH Value Final pH Value 6 Water 6 13 7 Sodium Chloride 6 14 8 1g of Solid Sodium Acetate 6 13 9 5g of Solid Sodium Acetate 6 13 10 10g of Solid Sodium Acetate 7 7 ________________ Discussion: 1. From your results in this experiment, which solution of those you tested had the greatest buffer capacity: * Toward strong acid? * Toward strong base? Discuss. Buffer capacity is the ability of a solution to resist changes in pH by either absorbing or desorbing H+ and OH- ions when small amount of acid or base is added. Buffer capacity is also a quantitative measure of resistance to pH change upon the addition of H+ or OH- ions. From the results of the experiment, solution in test tube 5 had the greatest buffer capacity toward strong acid, which is 10g of solid sodium acetate (CH3COONa) added with 50 ml 0.1 M acetic acid. This solution has the smallest change in the pH value when 1 ml 6.0 M hydrochloric acid is added into it. The pH value is changed from 8 to 7. With the addition of hydrochloric acid (HCl), the increase of H+ ions are counteracted with the excess of acetate ions to form CH3COOH. Thus, the added H+ ions are neutralized and the pH of the buffer solution is changed. ...read more.

concentration to increase by less than the quantity expected for the amount of strong acid added. Correspondingly, when a strong base is added to the mixture, the hydrogen ion concentration (H+) decreases by less than the quantity expected for the amount of base added. This is because the reaction shifts to the right to accommodate for the loss of hydrogen ion (H+) in the reaction with the base. ________________ 6.0 Conclusion: In a nutshell, we are able to understand the nature of buffer. In other words, we could define nature of buffer in which solution that resists a change in pH when acids or bases are added. Besides, we are able to prepare a buffer from acetic acid and sodium acetate. Sodium acetate is a weakly basic salt and the conjugate of acetic acid. A mixture of sodium acetate and acetic acid makes good buffer for a weakly acidic solution. If hydrochloric acid is added to acetate or acetic solution, the hydronium ions produced by the nearly complete dissociation of the hydrochloric acid react with the acetate ions to form molecular (non-dissociated) acetic acid. According to Le Chatelier?s Principle, the equilibrium is forced to the left, reducing the concentration of hydronium and acetate ions, and increasing the concentration of the molecular acetic acid in the solution. If sodium hydroxide is added to the buffer solution, the NaOH ionizes completely in solution, yielding hydroxide ions and sodium ions. According to Le Chatelier?s Principle, the increase in hydroxide ions forces the acetic acid equilibrium to the right, decreasing the concentration of hydroxide ions and increasing the concentration of acetate ions. ________________ 7. ...read more.