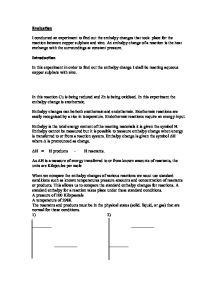 Experiment to find out the enthalpy changes that took place for the reaction between copper sulphate and zinc.

Also I could have had a colorimeter, which could have shown me when the reaction ended. This could have helped me because it would have been a point where I would have recognised when the temperature would start to fall. Another improvement is that I could have done the experiment again and gain another set of results to compare with my original results. Errors and anomalous results. The errors that occurred in this experiment are as follows. When I took a temperature reading my body heat may have interfered with the temperature. Also due to the lack of range on the thermometer I had to use my own guesswork as to what the temperature was when it was between two whole numbers. Also the experiment was not very efficient. By this I mean that a lot of energy was lost to the surrounding as there was a lack of insulation. If you look at my results you will see that there are not any anomalous results. ...read more.