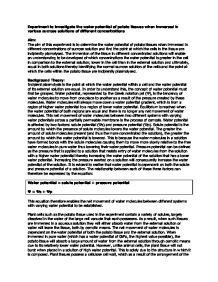 Firstly, the range of concentrations used by Marilyn (a number of concentrations close to the predicted point at which incipient plasmolysis was likely to have occurred) allowed the results obtained to be of an accurate nature. The results were also likely to have been valid due to Marilyn's expertise and skills in the area due to her professional background. Furthermore, it is likely to have be regarded as appropriate to use Marilyn's results as a basis for the prediction due to be made as her experiment was also central to the water potential of potato tissue specifically. Dissimilar to the investigation carried out by the students at the US School, Marilyn aimed to investigate the water potential of potato tissue through the means of measuring the change in length of the tissue after immersion, rather than measuring the change in mass. Although using length is likely to be less accurate (especially due to the fact that the electronic balance used to measure mass is far more precise (0.001 g accurate) than the vernier calliper (0.1mm accurate) used to measure length), it is likely to be a more reliable means of measuring the water potential as there is less room for error. As a result, this method shall be adopted as a means for investigating the water potential for the experiment due to be undertaken. Marilyn did not however use the same initial length for each of the potato tissues before immersion in to the sucrose solutions. Although this did not have any effect o the validity of the results, it would have been easier to have the same initial length when comparing different readings. The preliminary study and the secondary data have enabled an understanding to be developed of the best possible means of carrying out the proposed experiment. The following summarises the methods that shell be adopted as a result of these previous studies: * The experiment shall aim to investigate the water potential of potato tissue and thus the point of incipient ...read more.

A further variable which must be kept constant is the temperature in which the sample tubes are kept. This is because temperature can have an effect on the level of osmosis that occurs. Risk Assessment: When carrying out an experiment of this nature, it is important to acknowledge the need for safe working. There are many aspects within the investigation that are hazardous and could thus, cause possible harm to those carrying out the experiment. Focal to the experiment is the use and production of various solutions. There is therefore a likelihood of spillages occurring. Such spillages could be hazardous as they could cause falls and other such accidents. In order to prevent such incidents from occurring, those involved in carrying out the experiment must therefore ensure that any spillages are cleaned up immediately. It may also be appropriate to warn others if a spillage occurs so that they are aware of the potential risk. Furthermore, another potential hazard lies in the great use of glass ware within this experiment. A number of apparatus required in order to carry out this investigation appears to be made of glass and therefore of a delicate nature, such equipment include pipettes and the sample tubes. It is thus possible that breakages may take place. Breakages are likely to cause great harm if caution is not taken. Such measures that are required to be enforced if breakages were to occur include using a dustpan to clear all fragments of broken glass and disposing of such material through an appropriate means and also, alerting those in the surrounding area. The final potential hazard existent in the carrying out of the proposed experiment is the use of sharp objects such as the scalpel and cork borer when cutting the potato cylinders. Recklessness when handling such objects is more than likely to result in accidents and bodily harm. In order to avoid such events, those carrying out the experiment must ensure that they take great care and handle the objects by the correct means, i.e. cutting the potato cylinders away from themselves correctly on the cutting tile. ...read more.