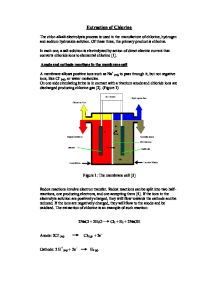 Extraction of Chlorine The chlor-alkali electrolysis process is used in the manufacture of chlorine, hydrogen and sodium hydroxide solution. Of these three, the primary product is chlorine. In each one, a salt solution is electrolyzed by action of direct electric current that converts chloride ions to elemental chlorine [1]. Anode and cathode reactions in the membrane cell A membrane allows positive ions such as Na+ (aq), to pass through it, but not negative ions, like Cl- (aq), or water molecules. On one side circulating brine is in contact with a titanium anode and chloride ions are discharged producing chlorine gas [2]. (Figure 1) Figure 1: The membrane cell [3] Redox reactions involve electron transfer. Redox reactions can be split into two half-reactions, one producing electrons, and one accepting them [4]. If the ions in the electrolyte solution are positively charged, they will flow towards the cathode and be reduced. If the ions are negatively charged, they will flow to the anode and be oxidised. The extraction of chlorine is an example of such reaction: 2NaCl + 2H2O Cl2 + H2 + 2NaOH Anode: 2Cl- (aq) Cl2 (g) + 2e- Cathode: 2 H+ (aq) + 2e- H2 (g) Redox reactions in the membrane cell If chlorine is produced in the presence of sodium hydroxide solution it will combine with it to produce ClO- and Cl- ions, which will result in production of sodium chlorate ( | ), NaClO. ...read more.

NOx is proven to be hazardous to plant and animal health. [1] When carbon compounds in the fuel are oxidised, carbon monoxide is formed. 3O2 + 2CH4 --> 2CO + 4H2O Carbon monoxide is harmful because it reduces oxygen delivery to the body's organs and tissues. It is most harmful to those who suffer from heart and respiratory disease. High CO pollution levels also affect healthy people. [2] Hydrocarbon pollution results when unburned or partially burned fuel is emitted from the engine exhaust, and also when fuel evaporates directly into the atmosphere. C2H6 + 1.5O2 --> CO2 + H2O + CH4 Hydrocarbons include many toxic compounds that cause cancer and other adverse health effects. [2] In sunlight, NOx (a primary pollutant) reacts with hydrocarbons to produce a variety of harmful substances called photochemical oxidants. These include ?-oxoethylperoxylnitrate (Peroxyacetyl nitrate, or PAN - Figure 1) and ozone (O3) (secondary pollutants). Ozone is a pollutant gas in the lower atmosphere because it is an irritant, is toxic, and causes health problems. It is also involved in formation of photochemical smogs. Figure 1: Peroxyacetyl nitrate Ozone is formed by the photochemical reaction of NOx with oxygen. Step 1 NO2 --> NO + O Step2 O + O2 --> O3 [2] There are three main types of car engine: the conventional engine, the 'lean-burn' and the diesel engine. One difference between them is the ratio of air : fuel that they use. ...read more.

The following reactions then occur on the surface of the titanium dioxide crystals (Figure 4): O2 + e- --> O2- H2O --> H+ + OH + e- The overall reaction: H2O + O2 --> H+ + O2- + OH The hydroxyl radical is a powerful oxidising agent and can oxidise nitrogen dioxide to nitrate ions: NO2 + OH --> H+ + NO3- The superoxide ion can form nitrate ions from nitrogen monoxide: NO + O2- --> NO3- The nitrate is then washed away by rain or it soaks into the block to form stable compounds within the concrete. [3] Figure 4: A noxer block Three-way catalytic converters Three-way catalytic converters oxidise CO, CxHy and reduce NO emissions. They only work if the air:petrol mixture is controlled so that it's exactly the stoichiometric mixture for the fuel. If the mixture is too rich, there will not be enough oxygen in the exhaust fumes to remove CO and CxHy. This means that cars that have three-way catalytic converters need to have oxygen sensors in the exhaust gases, linked back to electronically controlled fuel injection systems. (Figure 5) Figure 5: A three-way catalytic converter Problems yet to be solved Ground level ozone is a product of NOx gases, VOC's and oxygen in the presence of visible/ultraviolet radiation from the sun. It is destroyed by the reaction of combustion products of internal combustion engines. It is not wholly a road transport problem. Improvements could be made by bringing out 'oxygenated fuels' that contain methyl tertiary butyl ether which is believed will lead to cleaner emissions. [8] ...read more.