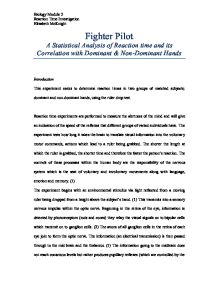 Fighter Pilot A Statistical Analysis of Reaction time and its Correlation with Dominant &amp; Non-Dominant Hands

Fighter Pilot A Statistical Analysis of Reaction time and its Correlation with Dominant & Non-Dominant Hands Introduction This experiment seeks to determine reaction times in two groups of matched subjects; dominant and non-dominant hands, using the ruler drop test. Reaction time experiments are performed to measure the alertness of the mind and will give an indication of the speed of the reflexes that different groups of varied individuals have. The experiment tests how long it takes the brain to translate visual information into the voluntary motor commands, actions which lead to a ruler being grabbed. The shorter the length at which the ruler is grabbed, the shorter time and therefore the faster the person's reaction. The controls of these processes within the human body are the responsibility of the nervous system which is the seat of voluntary and involuntary movements along with language, emotion and memory. (1) The experiment begins with an environmental stimulus via light reflected from a moving ruler being dropped from a height above the subject's hand. (1) This transmits into a sensory nervous impulse within the optic nerve. Beginning in the retina of the eye, information is detected by photoreceptors (rods and cones) they relay the visual signals on to bipolar cells which transmit on to ganglion cells. (2) The axons of all ganglion cells in the retina of each eye join to form the optic nerve. The information (an electrical transmission) is then passed through to the mid brain and the thalamus. (1) The information going to the midbrain does not reach conscious levels but rather produces pupillary reflexes (which are controlled by the autonomic nervous system) and eye movements. (1) In the thalamus, ganglion cell axons transmit signals to the primary visual cortex in the occipital lobe of the cerebrum, this visual association region recognizes the meaning of the visual impulses and the cortical cells then send messages to other "higher" cortical areas, associative centres of the brain, where the information is questioned and transformed into a response. ...read more.

(n=60). Each subject must first be screened to see if they are correct for the test. Procedure 1. Arrange with students union staff in Belfast Metropolitan College, College Square East, that an area will be free for use at a certain time during the day. 11am to approximately 1.30pm 2. Arrange for a quiet area to be reserved 3. Set up area with table, chair, ruler, instruction sheet, pen and record pages 4. Beginning with dominant hands start approaching random women and asking if they wish to participate 5. If answered Yes begin asking questions from questionnaire, if answer No return to point four 6. Participants must answer questions successfully according to the requirements of the controlled variables to take part in the test, answers recorded. 7. Upon finding a suitable subject bring them over to the prepared quiet area 8. Read to or allow participant to read instruction list 9. Make sure participant is sitting correctly, knees together, arm along the side of the table with hand positioned properly, thumb stretched out, use Appendix 4 as a reference 10. Hold ruler so that the very bottom of it is in line with the table top and is sitting very close to subjects finger and thumb 11. Remind participant to concentrate 12. Wait an appropriate amount of time, ranging between 5 and 10 seconds to try and catch the subject by surprise 13. Begin experiment by dropping ruler 14. Subject should catch the ruler 15. A measure of the dropping distance in centimetres should be recorded from just above the thumb 16. Repeat test two more times with this subject 17. Repeat point four to sixteen until 30 participants have done the test 18. Now repeat point four to seventeen but change to non-dominant hands, continue until 30 participants have done the test or within the time limit Risk assessment Safety is an important aspect in every experiment, even if the experiment seems to be very harmless. ...read more.

Also a range of different reaction time games should also be used to test the dominant and non dominant hands, games such as interactive games on the internet which involve clicking the mouse when a stimulus appears on screen, here are some examples: www.mathsisfun.com/games/reaction-time.html, www.bbc.co.uk/science/humanbody/sleep/sheep/, http://www.sciencenetlinks.com/interactives/zap.html. Conclusion This investigation was set out to determine where there was a significant difference between reaction times of dominant handed subjects and non-dominant handed subjects of a total of 60 participants. The experiment was held over an afternoon and the results were recorded. Given the time constraints a number of the controlled variables were not followed accurately giving rise to possibly invalid results. From the initial results dominant hands proved to be the fastest: > Dominant hand sample mean = 0.265 seconds > Non-dominant hand sample mean = 0.272 seconds Using these results a number of calculations were carried out to test whether these means are a product of chance or whether dominant hands have a faster reaction time The 95% confidence limits for each sample were calculated and were found to be practically matching and gave an entire overlap between the two groups when plotted in a bar chart. The widths of the intervals were also rather large further providing evidence of the unreliability of the data; this is highly visible in the graph drawn. A statistical t-Test was calculated for further evidence of a significant difference and the calculation gave a probability value of p = 0.251 which is higher than that of 0.05, set at 5% significance, resulting in the alternative hypothesis being rejected. The evidence found in this experiment provided the necessary information which allowed for the experimental hypothesis to be rejected and the null hypothesis accepted: > Dominant hands and non-dominant hands have no difference when tested in reaction times. Further investigation may be needed to fully confirm that this is true of the entire population, to include a larger sample and stricter controlled variables. ...read more.

An extremely detailed and well though through account of the investigation. Background theory described using A level standard language and a clear awareness shown of the various factors which may affect reaction times. Results presented clearly and statistical analyses performed correctly.