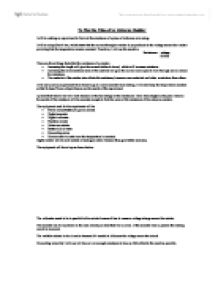 Find the Value of an Unknown Resistor.

To Find the Value of an Unknown Resistor

I will be making an experiment to find out the resistance of a piece of nichrome wire using.

I will be using Ohm’s law, which states that the current through a resistor is proportional to the voltage across the resistor providing that the temperature remains constant. Therefore, I will use the equation.

There are three things that affect the resistance of a resistor.

I will carry out my experiment three times to give a more accurate final reading. I will also keep the temperature constant so that it doesn’t have a big influence on the results of the experiment.

I will store the readings I have taken in a table and then plot voltage and current on the graph.

I expect to see on the graph I make a close fit straight line going through where current and voltage are zero.

The results of my experiment set out in a table.

The 3 tests of the same experiment on different currents read a similar voltage this shows that the results are quite accurate but not exact which may influence the average voltage to be different enough to make the plotted graph not to be accurate.

Extreme anomalous points were not found although there are points that don’t go exactly on the line on graph I have drawn.