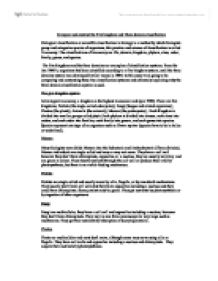 Animals acquire nutrients by ingestion. There are currently 10,000 species of monera, 250,000 species of protista, 100,000 species of kingdom fungi, and 250,000 species of kingdom plantae. We can determine what kingdoms organisms belong to using the following mini-key: * 1. Is it green or does it have green parts? o Yes - go to 2 o No - go to 3 * 2. Could be a plant or a protist, or blue-green bacteria. Make sure that the green is really part of the organism, though. An animal might have eaten something green, for example. o Single-celled? go to 6 o Multicellular? Plantae. Look for cell walls, internal structure. In the compound microscope you might be able to see chloroplasts. * 3. Could be a moneran (bacteria), protist, fungus, or animal. o Single-celled - go to 4 o Multicellular (Look for complex or branching structure, appendages) - go to 5 * 4. ...read more.

It also divides prokaryotes into two groups called Eubacteria and Archaebacteria. Woese argued that, on the basis of differences in 16S rRNA genes, these two groups and the eukaryotes each arose separately from an ancestor. Using molecular data, he saw that the there are two types of prokaryotes, one that is bacteria, and another that is different to bacteria- the archaea. Each of the three cell types have a specialty or a role. Bacteria tends to be the most prolific reproducers, Archaeans tend to adapt quickly to extreme environments, And Eukaryotes are the most flexible with regard to forming cooperative colonies. The picture below shows the three domains: So to conclude Woese used molecular data to classify organisms and he saw that single celled organisms were very different from bacteria, therefore he proposed the archaea, the five kingdom system couldn't accommodate for this therefore he added a level above kingdoms ;domains, to include bacteria,( which are prokaryotes that are truly bacteria), Archaea (that are prokaryotes but are different to bacteria) and Eukarya (organisms with a nuclei in their cell) ?? ?? ?? ?? ...read more.

This is a well researched and written report.
1. Information sources need to be referenced.
2. Images should be discussed.
3. Good practice involves including examples.
****