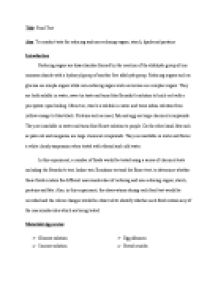 Transfer-Encoding: chunked ﻿Title: Food Test Aim: To conduct tests for reducing and non-reducing sugars, starch, lipids and proteins Introduction: Reducing sugars are disaccharides formed by the reaction of the aldehyde group of one monosaccharide with a hydroxyl group of another free aldehyde group. Reducing sugars such as glucose are simple sugars while non-reducing sugars such as sucrose are complex sugars. They are both soluble in water, sweet in taste and turns blue Benedict's solution to brick-red with a precipitate upon boiling. Moreover, starch is soluble in water and turns iodine solution from yellow-orange to blue-black. Proteins such as meat, fish and egg are large chemical compounds. They are insoluble in water and turns blue Biuret solution to purple. On the other hand, fats such as palm oil and margarine are large chemical compounds. They are insoluble in water and forms a white cloudy suspension when tested with ethanol and cold water. In this experiment, a number of foods would be tested using a series of chemical tests including the Benedict's test, Iodine test, Emulsion test and the Biuret test, to determine whether these foods contain the different macromolecules of reducing and non-reducing sugars, starch, proteins and fats. ...read more.