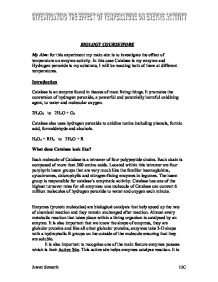 BIOLOGY COURSEWORK My Aim: for this experiment my main aim is to investigate the effect of temperature on enzyme activity. In this case Catalase is my enzyme and Hydrogen peroxide is my substrate, I will be reacting both of them at different temperatures. Introduction Catalase is an enzyme found in tissues of most living things. It promotes the conversion of hydrogen peroxide, a powerful and potentially harmful oxidizing agent, to water and molecular oxygen. 2H2O2 to 2H2O + O2 Catalase also uses hydrogen peroxide to oxidize toxins including phenols, formic acid, formaldehyde and alcohols. H2O2 + RH2 to 2H2O + R What does Catalase look like? Each molecule of Catalase is a tetramer of four polypeptide chains. Each chain is composed of more than 500 amino acids. Located within this tetramer are four porphyrin haem groups that are very much like the familiar haemoglobins, cytochromes, chlorophylls and nitrogen-fixing enzymes in legumes. The haem group is responsible for catalase's enzymatic activity. Catalase has one of the highest turnover rates for all enzymes: one molecule of Catalase can convert 6 million molecules of hydrogen peroxide to water and oxygen each minute. Enzymes (protein molecules) are biological catalysts that help speed up the rate of chemical reaction and they remain unchanged after reaction. Almost every metabolic reaction that takes place within a living organism is catalysed by an enzyme. It is also important that we know the shape of enzymes, they are globular proteins and like all other globular proteins, enzymes take 3-D shape with a hydropholic R groups on the outside of the molecule ensuring that they are soluble. It is also important to recognise one of the main feature enzymes possess which is their Active Site. This active site helps enzymes catalyse reaction. It is usually a depression to which another molecule or molecules can bind. The molecules that bind with the active site of an enzyme are called Substrate. ...read more.

A more accurate method should be used to collect oxygen displaced (if any) in order to reduce unnecessary lose of oxygen, and if there aren't any one should be as fast as possible in placing the cork on top of the conical flask, as this will prevent unnecessary lose of oxygen (iv) Try as much as possible to use the same equipments, such as the syringe so that measurements will be less affected, you can make sure you use the same equipment by labeling the equipment used (v) The experiment should be repeated more and a wider range of temperatures should be used to give a more broad analysis of the experiment, so that my results are better and a more accurate average is obtained, even though I repeated the experiments three times, more repetition of the experiment is more helpful in obtaining a more reliable and accurate initial rate of reaction(vi) Try as much as possible to do a particular temperature on the same day as both the liver and the catalase will still be in the same condition for all temperatures, this will help limit the chances of getting anomalies. Overall my experimental evidence was a reliable one, despite the effect of the errors and limitations because it supported my hypothesis and the basic knowledge about enzyme. It showed the trend of increased rate of reaction as temperatures increases up to optimum temperature, and also how rate of reaction decreases as temperatures go past optimum temperature, although the experiment will be more successful if I did this experiment again and made these changes mentioned above to it. Finally all the improvements mentioned above are a good way of increasing the reliability of experimental evidence and also minimizing significant sources of errors, as too many uncertainties in evidence may affect conclusion drawing. The presence of this limitations and errors are quite significant because it reflected on the results table. ...read more.