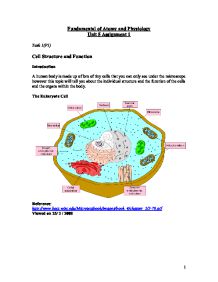 Fundamental of Atomy and Physiology Unit 5 Assignment 1 Task 1(P1) Cell Structure and Function Introduction A human body is made up of lots of tiny cells that you can only see under the microscope however this topic will tell you about the individual structure and the function of the cells and the organs within the body. The Eukaryote Cell Reference: http://www.bact.wisc.edu/Microtextbook/images/book_4/chapter_2/2-70.gif Viewed on 25/ 2 / 2008 Cell Membrane Every cell in the human body is covered by a cell membrane this is a double layer of phospholipids molecules therefore the protein within the cell membrane provides structural support to form a channel for the passage of the materials that acts as a receptor site and functions as a carrier molecule to provide identification maker. The function of the cell membrane is to separates the materials outside from the inside the cell this is to produce an integrity of the cell and to control passage of the materials in and out of the cell itself. Reference: http://training.seer.cancer.gov/module_anatomy/unit2_1_cell_functions_1.html# Viewed on 25/ 2/ 2008 Nucleus and Nucleolus The nucleus controls the centre of the cell there fore the thread of the chromatin in the nucleus contains DNA (deoxyribonucleic acid) which makes the genetic materials of the cell. The nucleolus is a solid area of RNA (ribonucleic acid) which is stored in the nucleus and is the spot of the ribosome structure therefore the nucleus decide on how the cell will function as well as the basic structure of that cell. Reference: http://training.seer.cancer.gov/module_anatomy/unit2_1_cell_functions_1.html# Viewed on 25/ 2/ 2008 Cytoplasm Cytoplasm is a gel like fluid inside the cell, this is average for chemical reaction this provides a platform so then the other organelles can function properly within the cells. The cell carries out all the functions of expansion, growth, and replication within the cytoplasm therefore the materials within the cytoplasm moves by diffusion this is a physical process that can only work for a short distance and period of time. ...read more.

Reference: http://www.ivy-rose.co.uk/Topics/Respiratory_System.htm http://www.brianmac.co.uk/physiolr.htm Website viewed on 20/5/08 Digestive System Digestive system includes the stomach, liver, pancreas, duodenum, ileum and colon. What is a Digestive system? Digestion is a breakdown and transportation of the solid and liquid food into microscopic substances therefore theses substances are then transported into different areas of the body The digestive system is a set of organs which transforms whatever we eat into substances that can be used in the body for energy, growth and repair. Once the food has been broken down by the various chemical processes, and nutrients removed, the rest is excreted as waste. The whole process involves many different organs and sometimes takes several hours. There are four stages of digestion:- * Mouth: ingestion (taking in of food or liquid into the body), chewing and swallowing this is the starch of digestion. * Stomach: mixing and protein digestion * Small Intestines: carbohydrates and fat digestion abortion * Large intestine: waste and excretion Reference: http://en.wikipedia.org/wiki/Digestive_system Website viewed on 28 / 5 / 08 Reference: http://training.seer.cancer.gov/module_anatomy/unit10_3_dige_regions.html Class notes hand out 26 / 2 / 2008 Web sight viewed on 27 / 2 2008 Where Does Digestion Start? The digestion starts within the mouth where the action of the teeth and saliva combined in the first stage of breakdown which is chewing and partially digesting the food so that it can pass threw more easily along the oesophagus therefore the ball of the food that leaves the mouth is known as bolus. Saliva * The salvia is a liquid secreted by three pairs of * The parotid gland placed below the ear * The submandibular gland and the sublingual gland both of these are placed below the tongue. * It contains water, mucus and enzyme salivary amylase. The Three Functions of the Saliva * To lubricate the food with mucus, making it easier to swallow * To start digestion: it contains the enzymes salivary amylase, these acts on cooked starch turning it into shorter polysaccharides. ...read more.

As soon as the interstitial fluid enters the lymph capillaries, it is called lymph. Returning the fluid to the blood prevents edema and helps to maintain normal blood volume and pressure. Reference: http://training.seer.cancer.gov/module_anatomy/unit8_2_lymph_compo.html Class notes handout 26 / 2 / 2008 Web sight viewed on 27 / 2 / 2008 Musculo - Skeleton System A musclo- skeleton system is a bone of the skeleton and their attached striated muscles from this system. The function of the musculo skeleton system is effects movement with the nervous system and stores calcium to protect and support vital organs to produce many blood cells. The skeleton is a hard framework of 206 bones that support and protect the muscles and organs of the human body this is divided into two parts. The axial skeleton: this supports the head, neck and the trunk this is also known as a torso this consists of skull, the vertebral column, the ribs and the sternum/ The appendicle skeleton supports the appendages or limb and attaches them to the rest of the body it consists of the shoulder girdle, the upper limb the pelvic girdle and the lower limb. Reference: http://dspace.mit.edu/html/1721.1/34966/3-051JSpring2004/NR/rdonlyres/91F88A47-AAD8-49A6-897E-AFC44A49EB98/0/chp_biomaterials.jpg Class notes handout 26 / 2 / 2008 Web sight viewed on 27 / 2 2008 Immune System The immune system is more scattered then the other system. The function of the immune system is to defend against invasion by microorganisms, anti cancer role and reject any materials perceived as foreign. The immune system is also part of our general body defenses against disease. It functions by recognizing viruses and bacteria and converting that information into hormones that activate the immune process. This response can be both specific, where the body responds only to certain agents and no others as well as nonspecific, where the body works to defend itself any harmful agent that enters the body. Reference: http://www.activamune.com/immune_system.PNG Class notes handouts 26 / 2 / 2008 Web sight viewed on 27 / 2 / 2008 STOMACH WALL ?? ?? ?? ?? 1 ...read more.