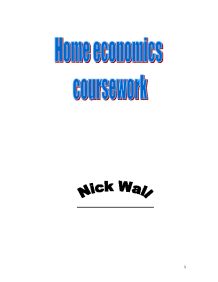 Home Economics - Why is nutrition important to sports people?

In order to obtain an idea for a task I could research, I decided to do an initial brainstorm of all the areas that would be possible to complete the project on (see fig1, next page). The factors that would affect my decision of what area to choose, were how easy it would be for me to research the topic, whether I knew people I could speak to about it and whether it was something that interested me. Because of these, I decided to research into nutrition for rowing. This was because I am a rower myself which meant that it would interest me, I would already know about the topic and I knew a variety of people who would be able to provide information and help on the subject. For research: To start the project I needed to carry out some preliminary, general research into the sport and its demands. The following are some things I needed to research: o Sports nutrition o Nutritional requirements of a normal person o Nutritional requirements of a rower o What a rower should eat on the day of, and during the week before, a race. Preliminary research Sources To ensure that I could gat a balanced set of information I decided to use data from several media types. These could include magazines, people, websites, books and companies. The following are some sources I thought would be useful: o ARA (amateur rowing association) o Internet - including rowing websites, BBC website, nutrition websites etc. o Sports magazines o Books form library o Olympic foundation o IOC consensus statement on sports nutrition 2003. The majority of the following initial research was obtained from the Australian International Rowing website, published ARA information and Amanda McCulloch (a sports nutritionist who often specialises in rowing, who gave a talk to my rowing team and allowed me to interview her). Why is nutrition important to sports people? The nutrition of an athlete is very important to their success at the sport. ...read more.

It is especially important for athletes in other special needs groups such as teenagers, or vegetarians. The following table lists and explains the uses of the important nutrients and where they can be found. Vitamin Main functions Sources Deficiency Excess A Essential for vision in dim light; necessary for maintenance of mucous membranes, skin and growth. As retinol in milk, fortified margarine, butter, cheese, egg yolk, liver and fatty fish. As carotenes in milk, carrots, tomatoes, dark green vegetables. Reduced night vision; loss of sight through gradual damage to the cornea. Lowered resistance to infection. Vitamin A is stored in the liver and toxicity can occur. D Promotes calcium and phosphate absorption from food and is thus essential for bones and teeth. Sunshine, fortified margarine, oily fish, egg yolk, fortified breakfast cereals. Failure of bones to grow and calcify leading to rickets in children and osteomalacia in adults. Vitamin D can be toxic. E Protects cell membranes from damage by oxidation. Vegetable oils, nuts, vegetables and cereals. Deficiency may occur in premature infants or due to malabsorption. Not known. K Essential in the formation of blood clotting proteins. Synthesis by bacteria in the gut. Dark green leafy vegetables, e.g. cabbage, brussel sprouts and spinach. Deficiency leads to an increased clotting time. Not known. Water soluble: Ascorbic acid Involved in the production of collagen - used in the structure of connective tissue and bone. Also aids wound healing and iron absorption. Fresh fruits especially citrus fruits and green vegetables. Also found in potatoes. Scurvy results from prolonged deficiency. Poor wound healing and bleeding gums. May lead to kidney stones. Thiamin Involved in the release of energy from carbohydrate. It is important for the brain and nerves which use glucose for their energy needs. Cereals, nuts and pulses are rich sources. Green vegetables, pork and fruits and fortified cereals contain thiamin. Deficiency leads to beriberi. Alcoholics sometimes develop deficiency. ...read more.

A detailed piece of work based on high quality research and specific knowledge of the issues facing athletes who row. There is a necessary focus on energy supply in the writing, and the planning of meals.