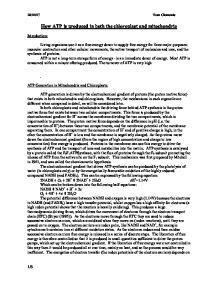 How ATP is produced in both the chloroplast and mitochondria.

How ATP is produced in both the chloroplast and mitochondria Introduction: Living organisms use it as a free-energy donor to supply free energy for three major purposes: muscular contraction and other cellular movements, the active transport of molecules and ions, and the synthesis of proteins. ATP is not a long-term storage form of energy - is an immediate donor of energy. Most ATP is consumed within a minute ofbeing produced. The turnover of ATP is very high . ATP Generation in Mitochondria and Chloroplasts: ATP generation is driven by the electrochemical gradient of protons (the proton motive force) that exists in both mitochondria and chloroplasts. However, the mechanisms in each organelle are different when compared in detail, as will be considered later. In both chloroplasts and mitochondria the driving force behind ATP synthesis is the proton motive force that exists between two cellular compartments. This force is produced by the electrochemical gradient for H+ across the membrane dividing the two compartments, which is impermeable to protons. The proton motive force depends on the difference in pH (i.e. the concentration of H+) between these two compartments, and the membrane potential of the membrane separating them. In one compartment the concentration of H+ and of positive charge is high, in the other the concentration of H+ is low and the membrane is negatively charged. As the protons move down the electrochemical gradient (from the region of high concentration and charge to low concentration) free energy is produced. Proteins in the membrane can use this energy to drive the synthesis of ATP and the transport of ions and metabolites into the matrix. ATP synthesis is catalysed by a protein called the F0F1ATPSynthase, with the flux of proteins through the F0 subunit promoting the release of ATP from the active site on the F1 subunit. This mechanism was first proposed by Mitchell in 1961, and was called the chemiosmotic hypothesis. ...read more.

Increasing the proton gradient increases the proton motive force, resulting in the production of more ATP. As in mitochondria these reactions involve an electron transport chain which consists of a number of complexes containing redox couples imbedded in the thylakoid membrane. As the complex is reduced and then oxidised by the passing of electrons down the transport chain it undergoes conformational changes (between the oxidised and reduced forms) which pump protons across the membrane. In chloroplasts the proton pump is a complex called cytochrome b6-f, which is similar to the cytochrome found in mitochondria. Electrons can be transferred to this pump from both photosystem II (PS II) and photosystem I (PS I). In non-cyclic photophosphorylation the electrons are transferred from PS II by the carrier plastoquinone (similar to ubiquinol in mitochondria). The reaction is non-cyclic because the electrons are delivered to PS I by cytochrome b6-f, i.e. they do not return to PS II. Cyclic phosphorylation involves PS I only. Light energy boosts the electrons to a high energy level where they are used to reduce ferrodoxin. From ferrodoxin they are either transferred to the electron transfer chain from which they are passed back to PS I (cyclic photophosphorylation) or they are used to reduce NAD+ to NADH, which supplies the reducing power in reductive biosynthesis. Differences between mitochondria and chloroplasts: Therefore, by combing the effects of photolysis and the ETC chloroplasts are able to produce very high concentrations of H+ in the thylakoid lumen (as low as pH 5) compared with in the stroma (pH 8, a difference of at least 3 pH units). This generates a high proton motive force, even though the membrane potential is close to 0 Volts. By contrast, mitochondria cannot create such a high concentration of protons (partly because rather than pumping the protons into a small compartment, like the mitochondrial matrix, they are pumped out into the space between the mitochondrial membranes) ...read more.

required for glycolysis. The alternative path of regeneration is by aerobic respiration, which is much slower because oxygen must be transported from the lungs and proton gradients produced in the mitochondria to drive the synthesis of ATP and regenerate NAD+. Cellular reserves of ATP, creatine phosphate and anaerobic respiration of muscle glycogen only power a 100m sprint. However, for a 1000m run part of the ATP consumed must come from oxidative phosphorylation, because anaerobic respiration (substrate level phosphorylation) can not produce enough ATP. Therefore of necessity the championship velocity for the 1000m event is 7.6 m/s compared with 10.1 m/s for the 100m sprint. A marathon runner must also mobilise fat reserves in order to produce enough ATP to complete the race. The fatty acids must be transported from the adipose tissues to the muscle cells and need to be degraded, hence mobilisation of fat reserves is even slower and the pace of the race is reduced. ATP can be synthesised from a variety of different compounds, using a variety of different mechanisms (substrate level phosphorylation, oxidative phosphorylation and photophosphorylation). Each has particular advantages. Plants are rooted in the soil and cannot move to obtain food like chemotrophs (if they did, then all complex molecules would be rapidly used up), consequently they must synthesise ATP from a ubiquitous substance that is continually renewed: sunlight. Animals can move and obtain food that, when processed, synthesises ATP. But because animals move they must be able to respond much faster than plants can. Therefore they must have mechanisms by which they can produce a sudden burst of ATP, in order to respond to their environment. As a result, several different compounds are used as sources of ATP and these can be mobilised at different rates, by using different mechanisms: substrate level phosphorylation or oxidative phosphorylation. The latter is more efficient, producing the most ATP, but it is also slower. Animals must control ATP is synthesis if they are to respond efficiently and successfully to external stimuli. ...read more.