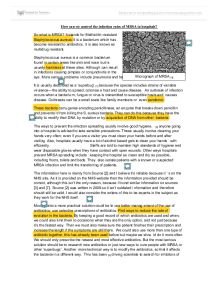 How can we control the infection rates of MRSA in hospitals? issue report

How can we control the infection rates of MRSA in hospitals? So what is MRSA? It stands for Methicillin-resistant Staphylococcus aureus; it is a bacterium which has become resistant to antibiotics, it is also known as multidrug resistant. Staphylococcus aureus is a common bacterium found in certain areas like skin and nose but is usually harmless at these sites. Although can result in infections causing pimples or conjunctivitis in the eye. More serious problems include pneumonia and heart disease. It is usually described as a 'superbug' [1] because the species includes strains of variable virulence-the ability to spread, colonise a host and cause disease. An outbreak of infection occurs when a bacterium, fungus or virus is transmitted to susceptible hosts and causes disease. Outbreaks can be a small scale like family members or even pandemic. These bacteria carry genes encoding penicillinase, an enzyme that breaks down penicillin and prevents it from killing the S. aureus bacteria. They can do this because they have the ability to modify their DNA by mutation or by acquisition of DNA from other bacteria. The ways to prevent the infection spreading usually involve good hygiene, [2] anyone going into a hospital is advised to take sensible precautions. ...read more.

The information provided isn't too old as it was published in 2007. I think the article is very informative and goes into a lot of detail about MRSA. Also, the information I found in this source was backed up by information in other sources, like [3] and [5]. So this helps me decide on the validity of this source and I think it is reliable and valid. These biological methods used to provide a solution are appropriate because they involve hygiene and increasing amounts of bacteria is due to a lack of hygiene. Each of the methods mentioned address the problem differently but all contribute to providing an effective solution to the problem. By keeping good hygiene it will reduce the amounts of infections in the hospitals, so each method which includes cleaning and washing is going to make a very effective solution. They are effective because they target the bacteria directly by attempting to remove them, this would mean less antibiotics would be needed and would slow down the evolution rate of Staphylococcus aureus. So unless we start removing the bacteria the problem will always be a problem, because they will still evolve to resist new antibiotics, so for the solution to be effective it must directly affect the bacteria before they have time to become resistant to new drugs. ...read more.

A few solutions involve the research of new forms of antibiotic. Here is where another question needs to be asked, should pharmaceutical companies in more developed countries be more actively researching? Personally I think they should, they have more resources to their disposal and more workers available to help them. In less developed countries, they are still trying to help people with other less serious issues. So they don't have as much time as a company in a developed country. This will be quite costly though which could cause another economic issue. Other solutions include [3] patient screening upon hospital admission (as mentioned before) with nasal cultures, this would prevent the cohabitation of MRSA carriers with non-carriers and prevent exposure to infected surfaces. Then there's decolonization: After the drainage of boils or other treatment for MRSA, patients can shower at home using chlorhexidine or hexachlorophene antiseptic soap. These solutions are more like precautions and help to prevent the spreading of the infection. So these alternative solutions help to control the infection rates in hospitals and shouldn't be as costly as they don't involve researching new drugs. So overall there are many solutions to the MRSA problem, none of which can completely wipe out these 'superbugs' like MRSA, but they help reduce and control the infection rates in hospitals and communities. ...read more.

**** A very good AS report, which clearly outlines the problems associated with hospital infections such as MRSA, outlines how improved hygiene appears to be reducing infection incidence, and explores alternatives to improved hygiene for reducing the issue of antibiotic resistance. To improve:
1)Add relevant biological detail about MRSA as an organism, and include detail of how antibiotic resistance arises and the mechanism of natural selection
2)Consider authors reputation and citations when evaluating primary research references. Consider whether all information sources are referenced on websites like NHS
3)Ensure that the problem the report addresses is outlined clearly, i.e. how MRSA spread can be reduced
4)Consider dividing the report into clear sections with sub-headings