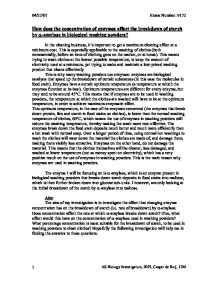 How does the concentration of enzymes affect the breakdown of starch by a-amylase in biological washing powders?

How does the concentration of enzymes affect the breakdown of starch by ?-amylase in biological washing powders? In the cleaning business, it's important to get a maximum cleaning effect at a minimum cost. This is especially applicable to the washing of clothes (both commercially, before an item of clothing goes on the market, or at home). This means trying to wash clothes at the lowest possible temperature, to keep the amount of electricity used at a minimum, yet trying to make and maintain a low-priced washing product that cleans effectively. This is why many washing powders use enzymes: enzymes are biological catalysts that speed up the breakdown of certain substances (in this case the molecules in food stain). Enzymes have a certain optimum temperature (a temperature at which the enzymes function at its best). Optimum temperatures are different for every enzyme, but they tend to be around 45�C. This means that if enzymes are to be used in washing powders, the temperature at which the clothes are washed will have to be at the optimum temperature, in order to achieve maximum enzymatic effect. This optimum temperature, in the case of the enzymes concerned (the enzymes that break down protein, fats and starch in food stains on clothes), is lower than the normal washing temperature of clothes, 60�C, which means the use of enzymes in washing powders will reduce the washing temperature, thereby making the wash more cost effective. The enzymes break down the food stain deposits much better and much more efficiently than a hot wash with normal soap. Over a longer period of time, using normal hot washings to wash the clothes will wear down the material the clothes are made of, and damage them, making them visibly less attractive. Enzymes on the other hand, do not damage the material. This means that the clothes themselves will be cleaner, less damaged, and washed at lower temperature (not as money spent on electricity), which has a very positive result on the use of enzymes in washing powders. ...read more.

This may well be caused by an error in measurement, as explained above. Neglecting the anomalous result, there is what appears to be a steady increase in the diameter of the clearance rings, as the concentration increases. This suggests that there is a fairly constant increase in the rate of breakdown of starch when increasing the concentration. A pattern is seen in this set of results, looking at the last the concentrations going from 6% to 8%, there is an increase of 1.9mm in the diameter of the clearance rings, and going from 8% to 10% there is a 1.8mm increase in the diameter of the clearance rings. This suggests there is an overall fairly constant increase in diameter of the clearance rings. I cannot, however, go as far as to say that due the fact that from 6% to 8% there is a 1.9mm increase in diameter and from 8% to 10% there is a 1.8mm increase in diameter the graph will level off, and that there would be a certain point where the concentration of the enzyme solution does not become the limiting factor anymore, mainly because due to the anomalous result I cannot tell whether the increase is leveling off or not, or whether it is a fluctuating increase. This would however seem to be a fairly logical conclusion to draw. An increase in the number of enzyme molecules means that comparatively, each enzyme molecule will have less starch molecules to break down. For example, say if initially the ration of enzyme:starch molecules was 1:20. Doubling the concentration of the enzyme solution means doubling the amount of enzyme molecules. This means the enzyme:starch molecule ratio has now become 2:20, or rather 1:10. The ratio has been halved. This means that now, each enzyme molecule will only be needing to break down half the number of starch molecules they were originally breaking down. Technically, this means that the rate at which these starch molecules are broken down will have doubled as well. ...read more.

Upon placing the rack of boiling tubes in the water bath, they will be left submerged in the water bath for 10 minutes (keep track of time using a stop clock or a stopwatch), in order to allow the enzyme to equilibrate. Then, a known volume of starch suspension is added to each of the boiling tubes, along with several drops of potassium iodide indicator. Upon adding these two, the time is noted down at which they were added to the boiling tubes (using the stopwatch or stop clock). Once the indicator has turned colourless (which means all of the starch in the boiling tubes has been broken down) the timer is stopped, and the time taken to break down the starch is noted down in a results table. In several ways, this method is better that the method I had previously chosen to do the experiment with. This method allows me to keep both the pH and the temperature at an optimum (as the enzyme will be at its optimum temperature and pH, the reaction time will be much faster, in comparison to using the method with the agar plates, making the process less time consuming as well. However, each concentration will need to be done separately, and each concentration will need at least two repeats (to make sure results are similar), making the process still fairly time consuming. Also, the end point at which all the starch has broken down is not very clear. The end point will also be decided by the human eye, and human interpretation, which is not a very accurate way of deciding the end point. This will make the end point of the experiment much less accurate that that of the experiment using the agar plates. In this experiment, the time taken for a colour to disappear is being measured, which is not an accurate measurement, whereas with the agar plates, a certain distance is being measure, which is much easier to measure to a good degree of accuracy, using measuring equipment (in this case the Vernier calipers were used). ...read more.

****
A very thoroughly planned and documented report which shows the student has considered the way in which the variables are controlled and sources of error in depth. The project could be improved by giving more thought to the way the data was analysed.
Research and rationale
The rationale for the investigation is clearly justified in terms of its scope and appropriate biological principles are discussed. Additional sources were selected and used effectively.
Planning
There is evidence of thought and ingenuity in the deign of the experiment. A testable hypothesis was formulated and biological knowledge used to explain the prediction. A quantitative prediction would gain more marks. The important variables to be considered were described but not all were controlled. The apparatus was listed and justified. Safety has been considered but the recommendations could have been presented in a more concise way.
Implementing
It appears the apparatus was used competently in an organized manner. The data was recorded well but the organization of the tables could be improved.
Analysis and Evaluation
Graphs were not available to view but summary tables were presented and the results discussed at length. Results were interpreted using biological principles. It would have been better to discuss the summary of the overall findings rather than each individual set of results which did not help to make the key findings clear. Statistical tests were not included. The anomalies were discussed at length and some possible causes of errors evaluated.
Communicating
The layout of the report was acceptable although the additions of more subheadings would have made the organization a little better. Data could have been recorded more effectively to aid the comparison of the figures.
Spelling, punctuation and grammar are acceptable with scientific terms used correctly throughout.