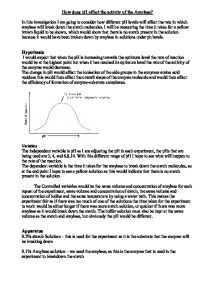 How does the pH affect the activity of amylase

How does pH affect the activity of the Amylase? In this investigation I am going to consider how different pH levels will affect the rate in which amylase will break down the starch molecules. I will be measuring the time it takes for a yellow brown liquid to be shown, which would show that there is no starch present in the solution because it would have been broken down by amylase in solutions under ph levels. Hypothesis I would expect that when the pH is increasing towards the optimum level the rate of reaction would be at the highest point but when it has reached its optimum level the rate of the activity of the enzyme would decrease. The change in pH would affect the ionisation of the side groups in the enzymes amino acid residues this would then affect the overall shape of the enzyme molecule and would then affect the efficiency of formation of enzyme-substrate complexes. Variables The independent variable is pH as I am adjusting the pH in each experiment, the pHs that are being used are 3, 4, and 6,8,10. With this different range of pH I hope to see what will happen to the rate of the reaction. The dependent variable is the time it takes for the amylase to break down the starch molecules, so at the end point I hope to see a yellow solution as this would indicate that there is no starch present in the solution The Controlled variables would be the same volume and concentration of amylase for each repeat of the experiment, same volume and concentration of starch, the same volume and concentration of iodine and the same temperature by using a water bath. This makes the experiment fair as if there was too much of one of the solutions the time taken for the experiment to work would be either longer if there was more starch solution, or quicker if there was more amylase as it would break down the starch. ...read more.

have made the buffer solution slightly more acidic than it should have been as it was difficult to get precise measurements with only just a measuring cylinder so the reason why there was a longer end point could have been because the buffer solution was more acidic. If I were to do the experiment again I would use a syringe for the last few millimetres to make sure I was getting the more accurate results that I should be getting, and would also not round up the end point to the nearest 30 seconds so I would get a more accurate result. I would do this by recording the final colour change giving an exact time; I would also use the measuring equipment more accurately. I would also use a different range of pH. From this experiment I can tell that the pH that give the best results would be a low one generally from pH4 to pH7 so next time I would use pH3,4,5,6,7,8 as the pHs that I would be investigating. I would still keep to extreme pHs such as pH3 and pH10 just to show the symmetrical graph shape that should be obtained. There are a number of other experiments that I could do to investigate how starch gets affected by different factors of amylase. For example I could investigate different temperature but use the same pH as in my experiment the temperature was the same throughout; as I am sure by doing this I could have gained a better insight to how the enzyme amylase works. When you change the temperature at which the general experiment takes place you still get similar results to when you change the pH as the enzyme has an optimum temperature as well as an optimum pH but when talking about the shape of the graph curve there is a more sudden drop after you have reached the optimum temperature of the enzyme as it denatures under extreme conditions, similarly to extreme conditions of pH. ...read more.

A competent report of an investigation into the effect of pH on the activity of the enzyme amylase. The student has produced a generally well-written account of some good science which generated a valid set of results. However, the work could be further improved by addressing the following issues:

[1] A detailed introduction is needed in which previous work on pH and amylase activity is discussed;

[2] The language needs to be tightened up, avoiding non-scientific phrases and instead making full use of appropriate biological terms.

[3] The results need to be analysed in more depth with greater emphasis placed on the biochemical effects of pH changes on the enzyme molecule.

However, the results indicate that the writer's practical skills are of a high order.