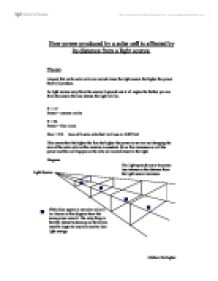 I expect that as the solar cells are moved closer the light source the higher the power they will produce.

This means that the higher the flux the higher the power as we are not changing the area of the solar cells as this remains is constant. So as flux increases so will the power and this will happen as the cells are moved closer to the light. 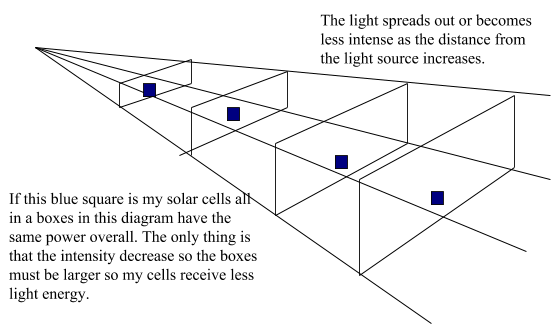 Using what I know about space and the way light intensity changes the relation I expect is.             Power = 1/distance2

To measure power by a solar cell and distance light source is away form it, then to plot the distance against power to get a strong inverse relationship.

Then to plot a

As you can see I have used a resistor in the circuit this is to minimise wasted energy lost by the power supply or solar cell. If the circuit did not have a resistor in the current would flow round very fast, having a large current creates more heat as speed is greater and creates large amounts of wasted heat energy, giving miss-leading results. However this was probably this would not as the current is dependant on the intensity of the light nevertheless if there was no external resistance in the voltage would read zero, as there is no potential difference across the solar cell, so calculating the power would be inaccurate. 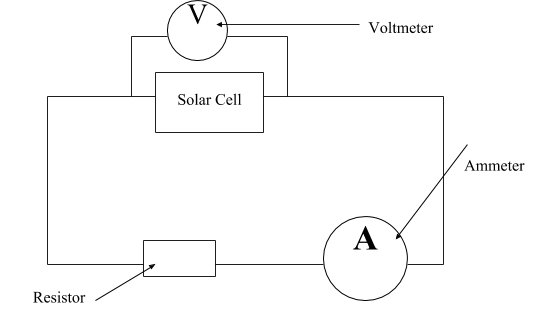 If I were to carry this investigation out again I would ensure that the light condition were kept at a constant level, this could be done by carrying out the experiment in a blacked out room. From my graphs I have proven my prediction of power being proportional to 1/distance2. From my graph that plots this there is a clear strong correlation between the two sets of data.