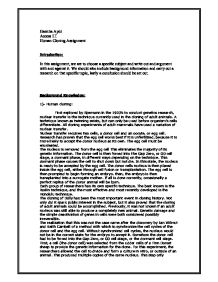 Haretha Aydi Access I.T Human Cloning Assignment Introduction: In this assignment, we are to choose a specific subject and write out and argument with and against it. We should also include background information and carry out a research on that specific topic, lastly a conclusion should be set out. Background Knowledge: 1)- Human cloning: First explored by Spemann in the 1920's to conduct genetics research, nuclear transfer is the technique currently used in the cloning of adult animals. A technique known as twinning exists, but can only be used before organism's cells differentiate. All cloning experiments of adult mammals have used a variation of nuclear transfer. Nuclear transfer requires two cells, a donor cell and an oocyte, or egg cell. Research has proven that the egg cell works best if it is unfertilized, because it is more likely to accept the donor nucleus as its own. The egg cell must be enucleated. The nucleus is removed from the egg cell This eliminates the majority of its genetic information. The donor cell is then forced into the Gap Zero, or G0 cell stage, a dormant phase, in different ways depending on the technique. This dormant phase causes the cell to shut down but not die. In this state, the nucleus is ready to be accepted by the egg cell. The donor cells nucleus is then placed inside the egg cell, either through cell fusion or transplantation. The egg cell is then prompted to begin forming an embryo. then, the embryo is then transplanted into a surrogate mother. If all is done correctly, occasionally a perfect replica of the donor animal will be born. Each group of researchers has its own specific technique. ...read more.

If there is a change in the genetic code the hormone produced is different and doesn't work correctly. Human growth hormone is only active in humans therefore a hormone from another species cannot be used in it's place, as in the previous treatment for diabetes when insulin was not produced. Human Growth Hormone causes cells to grow and multiply by directly increasing the rate at which amino acids enter cells and are built into proteins. Human Growth Hormone deficiency results in dwarfism and the condition can only be treated if recognised in the early teens, before the bone plates close. Treatment is by supplementation of the hormone. In the past the hormone was removed from the pituitary glands of dead people and was then injected into people suffering from lack of the hormone. Nowadays genetic engineers can produce Human Growth Hormone in a similar way to the production of insulin, the gene is introduced into bacteria DNA such as E. Coli and the bacteria multiply to produce a yield of the hormone, which can then be injected into sufferers to replace the missing gene. Factor VIII is cloned for elimination of viral infections from blood transfusions in light of the AIDS epidemic. Factor VIII is also one of the proteins involved in blood clotting and is deficient in a group of haemophiliacs - sufferers of Haemophilia VIII. By introducing the correct gene for Factor VIII there is a greater chance of haemophiliac's blood clotting and therefore the risk of bleeding to death is reduced, as the protein to form blood clots will be manufactured in cells. Discussion: The practice of cloning can be used to benefit society and therefore should be legalized. ...read more.

This method is different from regular cloning that does not improve or change the genome, only duplicates it. Those who say that cloning and genetic engineering do not value human life are wrong because as you can see these processes can make life longer and better for many in our society. Animals are currently being cloned, like cattle and sheep that have been genetically engineered to maximize desirable traits. Research is also being done on the cloning of endangered species and dead animals. Many people do support cloning and whether the government makes laws against it or not, it will most likely take place. Then there are people like Dr. Richard Seed, a Harvard graduate who made headlines in 1997 when he claimed that he was going to attempt to create a human clone and had willing participants. It was also reported to the associated press in August of 1998, that a wealthy couple had given over 2 million dollars to Texas A&M University to have their dog cloned. This project is still in the workings though and it is not known if the doctors have actually began the process yet. Conclusion: In conclusion, whether the government bans cloning or not, it is inevitably going to take place. The discovery has been made and curious scientists are not just going to leave it alone. Decisions on whether or not your own DNA is replicated should be an issue that is private and left up to individuals, not the government. Since cloning is going to happen anyway, the government should accept it and regulate it to try to see that it is used to benefit the most people. ...read more.

This is a very well researched report that covers the science surrounding cloning well.
1. The sources of information need to be included and an indication method used.
2. There are several comments that display bias. Opinions need to be indicated as such.
3. The inclusion of primary information sources is excellent, but they should be referenced.
****