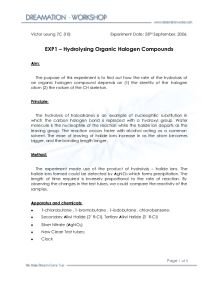 Hydrolysing Organic Halogen Compounds. The purpose of this experiment is to find out how the rate of the hydrolysis of an organic halogen compound depends on (1) the identity of the halogen atom (2) the nature of the CH skeleton.

Victor Leung 7C (10) Experiment Date: 28TH September, 2006. EXP1 - Hydrolysing Organic Halogen Compounds Aim: The purpose of this experiment is to find out how the rate of the hydrolysis of an organic halogen compound depends on (1) the identity of the halogen atom (2) the nature of the CH skeleton. Principle: The hydrolysis of haloalkanes is an example of nucleophilic substitution in which the carbon halogen bond is replaced with a hydroxyl group. Water molecule is the nucleophile of the reaction while the halide ion departs as the leaving group. The reaction occurs faster with alcohol acting as a common solvent. The ease of leaving of halide ions increase in as the atom becomes bigger, and the bonding length longer. Method: The experiment made use of the product of hydrolysis - halide ions. The halide ions formed could be detected by AgNO3 which forms precipitation. The length of time required is inversely proportional to the rate of reaction. By observing the changes in the test tubes, we could compare the reactivity of the samples. Apparatus and chemicals: * 1-chlorobutane , 1-bromobutane , 1-iodobutane , chlorobenzene; * Secondary Alkyl Halide (2� R-Cl), Tertiary Alkyl Halide (3� R-Cl) * Silver Nitrate (AgNO3) * New Clean Test tubes; * Clock Experiment Procedure and Observations 1. ...read more.

1-chlorobutane, 1-bromobutane, 1-iodobutane The reaction involved in 1-chlorobutane, 1-bromobutane and 1-iodobutane are very similar, they are all primary haloalkanes and they possess the same hydrocarbon skeleton - butane. Their reaction pathways are also similar. The substrate is favour to SN2 mechanism as it is a primary haloalkane, the carbon atom where the halogen atom is attached to, has two hydrogen attached to it. The molecule is favoured to the backside attack of the SN2 pathway. Steric hindrance is not significant. The reaction rate of the three similar substrates are contrasted by the carbon halogen C-X bonding. The shorter the bond length, the stronger the bond; the stronger the bond the more difficult it is for the successful attack to occur. The bond length depends on (1) the atomic size of the halogen atom and (2) the polarity of the bond. Halogen atoms has an increasing atomic size according to: Cl > Br > I . The covalent bonding is the interaction of the outermost shell of electron between the halogen atom and the carbon atom. The smaller the atomic radius, the halogen atom nucleus will exert a stronger the nuclear attraction to the bonding electrons. Therefore Cl atoms have the strongest covalent bonding when compared with Br and I. ...read more.

The forming of a benzene cation in SN1 reaction is also a very unstable intermediate because it requires the breaking the benzene resonance structure in its formation. This requires a very large activation energy thus its reaction is not favored. Combining the number of disadvantages in the process of hydrolysis of chlorobenzene to phenol, the reaction will only proceed under severe condition with sodium hydroxide as the nucleophile. Notes on Procedure Precautions The test tubes used for this experiment should be completely free of halide ions in order to obtain accurate result while the silver ions form precipitations. The use of alcohol is to act as a common solvent to increase the contact chance of reactants: H2O and the haloalkanes. Its importance is to increase the rate of reaction and obtain reliable results. Results In the experimental results, we see a strange result for the reaction involving the secondary haloalkane, the tube produce no observable result which was expected. This might be due to insufficient temperature for the SN1 reaction to overcome the EA in the rate determining step. The experiment should include a warming step which provides some kinetic energy to the molecules. The manual suggest a water bath at 60�, however, due to lab limitation, this step is skipped, thus the reaction may occur at a very slow rate. The absence of precipitation of 1-chlorobutane might also be related to the low reaction rate. ?THE END? ?? ?? ?? ?? ...read more.